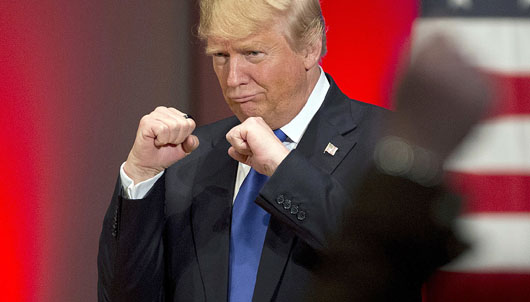 During the previous administration, sagging ratings “provoked a move away from breaking news and political programming” for CNN and MSNBC, The Hill noted in a July 3 report, adding that, as recently as 2014, CNN was airing “Dirty Jobs,” “America’s Most Wanted” or “Our America with Lisa Ling” in the prime-time 9 p.m. hour.

Now its all Trump, all the time – and the cable networks are pulling in huge ratings.

Trump again sent what he calls the “fake news” media into a frenzy over the weekend when he tweeted a doctored video showing him at a fake wrestling match body-slamming someone with the CNN logo superimposed over their face.

Most of the “fake news” media interpreted the “fake” wrestling match as a real threat of violence against them.

At the same time, MSNBC and CNN boast that their ratings are soaring.

According to Nielsen’s second-quarter ratings, MSNBC’s total viewers are up 73 percent year-over-year, with prime-time viewership up 86 percent, easily making it the fastest-growing cable news outlet, the Hill report said.

Joe Scarborough said on Twitter that his show had a record month for ratings.

Even though CNN has had a rough stretch with retraction-related dismissals, sting videos showing producers expressing frustration with the network’s editorial decisions and allegations of bias coming from the right, it has still grown 25 percent in total viewers and 10 percent in prime time year-over-year, the report said.

“The network’s deep well of contributors and political pundits ensures that the Trump show is always rolling.”

The Trump war is also “opening new doors for previously little-known journalists” who are the subjects of viral video clips and tweets.

Taking on the White House worked for Brian Karem, an editor for a regional newspaper in the Washington suburbs, the Hill report said.

“Karem was little-known … when a video of him lecturing White House deputy press secretary Sarah Huckabee Sanders over press access went viral. Less than a week later, he has nearly 80,000 followers on Twitter.”

Left-leaning outlets “have held Karem up as a hero, although the episode cemented in the minds of many conservatives that reporters want to use the briefings to make their names by grandstanding against the administration,” the report said.

Other reporters have had similar experiences, the Hill report noted.

Veteran reporter April Ryan, who has been covering the White House for 20 years, “scored a contributor position on CNN this year after several high-profile dust-ups with Trump and (Sean) Spicer.”

CNN White House reporter Jim Acosta “has become the face of the resistance inside the briefing room, railing against the administration on the air and on social media.”

Acosta’s “antagonistic tweets have gone viral amid the furor over the White House’s decision to take the briefings off-camera. Frustrated with the lack of camera access, Acosta began to tweet pictures of his socks – the only things in the briefing, he wrote, that he was allowed to show on camera.”

Some media watchers are growing alarmed by the increasingly antagonistic approach some in the press are taking, the Hill noted, but most expect it will continue as long as the feuding with Trump attracts new viewers.

“The news world is reaping some short-term benefits from the running battle with Trump, but this is really a short-sighted and ultimately losing strategy,” said Jeffrey McCall, a media critic and professor at DePauw University. “Sure, it’s sensational and somewhat entertaining, but it makes the media look small and petty. Media credibility is quite low and most news consumers aren’t going to sympathize with the news industry, even when Trump makes boorish attacks.”