Scalise credits Trump’s unreported ‘human side’ for his recovery

House Majority Whip Steve Scalise, who was shot in June 2017 by an anti-Trump supporter of Sen. Bernie Sanders during a congressional baseball practice, credited President Donald Trump with helping to speed his recovery. 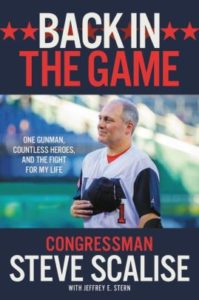 In his new book, “Back in the Game”, the Louisiana Republican noted that the president and first lady Melania Trump visited him in the hospital on the night he was shot.

“They were really wonderful to my wife in helping to console her at the most difficult time. And he would follow up. He would call now and then, just randomly, I’d get a call at eight o’clock at night, you know, ‘This is the White House. Would you hold for the president.’ And he would just call to check in and see how I was doing.”

Scalise noted: “That’s the side of the president that very few people see, and I don’t think the press reports fairly just how warm and genuine of a person he is. He is a warm and genuine person, he cares about people.”

Trump, he said, “motivated me to get back into the game.”

Hodgkinson was killed in a shootout with Capitol and Alexandria Police.

Scalise said that he eventually he might consider forgiveness for Hodgkinson. “It’s something to struggle with. I’m Catholic. I’m probably not there yet. That’s something I’m going to have to work with my priest on.”