Russia’s stake in Korea: How U.S.-backed unification could work for Moscow

We hear so much about China and Japan competing on and for the Korean peninsula, now and historically, that we overlook one other great Northeast Asian power.

That would be Russia, which has a 17-kilometer border with North Korea as the Tumen River flows into the sea.

In the old days of the Soviet Union, trains crossed the river almost every day shipping oil into North Korea for almost nothing – that is, paid for in near worthless North Korean won. 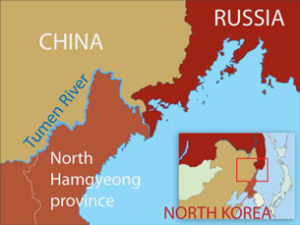 North Korean free-loading off Soviet largesse ended with the demise of Soviet rule in 1991, a happenstance that led to the famine that devastated the North in the 1990’s. Bereft of cheap oil, North Korea did not have enough to power industry, operate motor vehicles or heat homes, offices and factories.

For North Korea, the only hope was China, which supplies virtually all the North’s oil – enough for survival but not enough to build a strong industrial base. These days, while fretting over North Korea, Russians worry about the fast-rising behemoth with which their vast country shares a frontier stretching 4,209 kilometers.

For all the hype about the Rason special economic zone just below their Tumen River border with North Korea, business between Russia and the North is not good.

“They have nothing to sell,” a Russian economist, Sergey Lukonin of the Primakov National Research Institute of World Economy and International Relations, told me after a conference in Seoul that addressed economic policies of neighboring countries toward the Korean peninsula after unification.

How could that be, I wondered, considering all we hear about the Rason zone and Russia’s interest in a rail route from Busan up the east coast through South and North Korea and on to Siberia and Europe.

“There is nothing,” Lukonin repeated. What about trade by sea between Rason and Vladivostok? “Nothing is moving,” he said.

Talking about “Russia’s strategy for economic cooperation with unified Korea, Lukonin gave a bleak picture. First there would have to be “regime change” – an argument that most analysts hesitate to consider. Sure, in a list of scenarios, you have to include the possibility that the Kim dynasty may end with the demise of its third dynastic leader, Kim Jong-Un, but forecasts of his downfall are too risky to take seriously.

How seriously, then, should we regard Russia’s stake in North Korea?

That’s a question that a long-time friend, Rensselaer Lee, with whom I’ve been in touch since college days, weighs with a Russian economist, Artyom Lukin, at the School of Regional and International Studies at Russia’s Far Eastern Federal University.

In a ground-breaking book, “Russia’s Far East: New Dynamics in Asia Pacific & Beyond,” they lay out the prospects.

“Moscow’s commitment to North Korea should not be overestimated,” they caution. “It is quite likely that Moscow will eventually conclude that continuation of the North Korean regime benefits China much more than Russia.” That said, they argue that a reunified Korean peninsula under South Korean rule, supported by the U.S., might be what Russia needs.

Their view: “Major projects that are now stalled due to the inter-Korean conflict, such as oil and gas pipelines from Russia to Korea and the linking of Korean railways to the Russian trans-Siberian Railway would go ahead if the North Korean problem was finally resolved.” To which they add: “Moscow is not happy with North Korea’s steady progress in the development of nuclear warheads and ballistic missiles.”

What the authors say next may come as a surprise: “Such considerations might lead Moscow to a tougher stance on Pyongyang and acceptance of a swift Korean reunification in the future even if” – here’s where their message will shock some observers – “it should be carried out as absorption of North Korea by a pro-U.S. South Korea – precisely the scenario that Washington wishes for.”

Regardless of how that scenario appeals to strategists in Washington, Russia’s history points to renewed engagement.

Japan thoroughly trounced the Russians in a war in 1905 that sank the Russian fleet and opened up the Russian Far East to Japanese inroads, but Soviet dictator Joseph Stalin exacted revenge when his Red Army regained all its lost territory from Japan after entering the war in the Pacific a week before the Japanese surrender.

Then, responding to pleas from Kim Il-Sung, Stalin provided arms and air support for North Korea in the Korean War.

Nowadays, Russians and Americans must balance Russia’s role in Northeast Asia with tensions in eastern Europe and the Middle East.

“Moscow’s willingness to cooperate with the United States will be directly linked to the general condition of Russian-U.S. relations,” write Lee and Lukin.

“If they remain tense, or become even more contentious, Russia would rather obstruct Washington’s Korean policies and instead choose to play second fiddle to China on the Korean affairs.”

Considering the history, U.S. leaders cannot help but look with suspicion on Moscow. It’s all part of the modern Great Game – a battle of wills and resources whose outcome is totally unclear but in which Russia counts as a leading contender.

Donald Kirk has been covering war and peace in the region for decades. He’s at kirkdon4343@gmail.com.

Russia’s stake in Korea: How U.S.-backed unification could work for Moscow, WorldTribune.com