Reports of the demise of the Republican Party are premature.

It makes good copy for Fox News and the few other slightly serious current spectacle reports. But the Talking Heads who spout this prediction have forgotten if they ever knew much about the history of American political parties.

They argue capture of the leadership of the Party by a billionaire populist TV star whose own past political inclinations were not those of the Grand Old Party candidate for president has led to its bifurcation. On the one side are the Trumpeters and those who have joined his bandwagon and on the other are the rock-ribbed conservative ideologues. The later dominated the Party’s serious discussions even if over more than a half century – except for the Goldwater anachronistic nomination of 1964 – their presidential candidates have been much further to the left.

Even the vaunted Ronald Reagan, despite his iconic reincarnation, more often than now is admitted, turned his back on conservative decisions as he compromised for an intensely popular presidency. 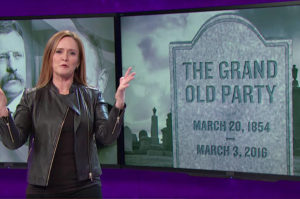 The Trump takeover of the Party’s steering wheel, as a matter fact, looks very much like the seizure of the GOP from the conservatives then led by Cincinnati’s Taft family by Wendell Wilkie in 1940. Then a former Democrat, a Wall Street businessman, — and one from the utilities sector which had been the target of much of Franklin Delano Rosevelt’s own populist rhetoric — stampeded the nominating convention. He loaded the galleries and perhaps was the antecedent of the Kennedy brothers a couple of generations later and their manipulation of the media and public opinion.

Aa it turned out, of course, Wilkie didn’t have a chance against FDR despite Roosevelt’s violation of the old axiom – reputedly laid down by George Washington – against third terms. But he did develop into a statesman and it was his role as much as that of Michigan’s Republican Sen. Arthur Vandeberg to fight the old-line isolationism of the GOP in a new world dominated by American economic power.

But the conservative core, licking its wounds, remained an important part of the Republican Party. Today’s argument that the GOP is facing death through internecine warfare between its two radically contradictory wings doesn’t hold up.

First off, American political parties – for the overwhelming majority of their histories – have been amalgamations of often diametrically conflicted forces. That arises, as much as anything from the fact that any national party is a continental organization, a vast collection of local political forces in the many different locales and conditions of American life from ocean to ocean and now beyond.

The current crepe hangers ignore the history of these kinds of parties, even in recent history.

It was after all a collection of the most disparate groups with whom FDR came to power in 1932. The Democrats, who held power, and dominated American political life for the next half century were a very, very strange combination. They consisted of a segregationist, ultra-conservative Southern Democrat contingent, setting the pace particularly in the Congress.

There were the Big City Machines, largely built on immigrant Irish political wit and the new urbanites who could be corralled and shepherded to the voting booths. There were the Socialists and Communists activists, few but disproportionately responsible for the hard slugging of policy formulation and implementation. And all this was capped – during FDR’s lifetime – by a Hudson River bsquire pretending to be aristocracy. It could not have been more disparate. But it held together then, as the Republicans will now, by the search for power.

It remains to be seen whether this division within the Party will keep it from power. While their divisions restrained the Democrats through the 30s and 40s, it did not keep them out of the White House and in control of the House of Representatives for almost half a century. It begs belief that even the most die-hard conservative ideologue will not come over to Trump leadership if it continues to bring “moderates”, independents, and even a new crop of “Reagan Democrats” into a strengthened party. That, after all, is the road to power and that it is what it is all about.

Conservatives will persuade themselves with some justification, that even in a Trump pragmatic administration they could burrow from within to achieve some limited conservative goals. And besides, the alternative is the Hillary Clinton ogre!

Rumors that the GOP is dead ‘have been greatly exaggerated’, Sol Sanders, WorldTribune.com