The Biden administration is using Laughlin Air Force Base in Texas as a base to “secretly” transport illegal immigrants throughout the United States, Fox News host Tucker Carlson said on Wednesday, citing leaked correspondence.

The Fox News host posted an image of an email, which appeared to be from Lt. Colonel Matthew Burrows, that alerted members of the base that “passenger aircraft” would be utilizing runways under the direction of Immigration and Customs Enforcement and Border Patrol. 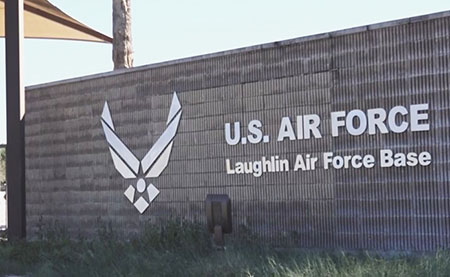 “Over the next few days, weeks or months you may see passenger aircraft on our ramp transporting undocumented non-citizens,” the email read in part. “Please review the attached public affairs guidance on this issue.”

Carlson said the email was obtained from a “whistleblower,” adding the information was confirmed by the Pentagon.

A statement that would be issued if inquiries were made said: “In coordination with the Department of Homeland Security and the Department of Defense, U.S. Immigration and Customs Enforcement and Del Rio Border Patrol will be using the Laughlin AFB runway to transport undocumented non-citizens via a Boeing 737.”

Burrows also told service members not to take pictures of the events, according to the email.

“Do not take photographs and refrain from posting anything on social media,” he said. “If anyone asks you about it, refer them to public affairs.”

Carlson noted: “Apparently, Americans don’t have a right to know where foreign nationals are being resettled in their own country. We do know, thanks to the Center for Immigration Studies (CIS), that the Biden administration has been sending illegal migrants all over the country for some time now.”

In a video from the CIS, the narrator says: “What’s happening most of the time is that they’re boarding buses and heading into America’s heartland. A conveyor belt of commercial and charter buses just like this one out of Del Rio, Texas. are carrying tens of thousands sight unseen from Texas, Arizona, and California borderlands northward and they’re dropping Haitian, Venezuelan, Cuban and Central American family units in Florida, New Jersey, Tennessee, Massachusetts, Missouri, North Carolina, Georgia, Kentucky and large cities in Texas such as Dallas and Houston.”

“Those were buses,” Carlson noted. “Now the administration is using aircraft and Air Force bases. That ought to give you some sense of the scale involved here. What you’re watching is demographic transformation, in our country, without our consent and in violation of our laws. That is happening. Our job is to shut up and accept it. We know that they will call us names if we don’t accept it.”

Carlson concluded: “But no, thanks. What’s happening, what they’re doing, is wrong. It’s moreover a violation of the most basic promise of democracy, which is that citizens get to control who runs the government. We, as citizens, have an absolute right to know what they are doing.”