Democrat governors in Blue states responded to the Covid pandemic by imposing lockdowns that caused high death rates, ruined children’s education, and destroyed businesses, according to a new by the National Bureau of Economic Research and Committee to Unleash Prosperity.

“Shutting down their economies and schools was by far the biggest mistake governors and state officials made during COVID, particularly in blue states,” WorldTribune.com columnist Stephen Moore, one of the study’s authors and co-founder of the Committee To Unleash Prosperity, said.

Despite now-disgraced former Gov. Andrew Cuomo initially being hailed for his strict response to the pandemic, New York performed “poorly on every measure” — ranking 49th overall, according to the study.

New Jersey was the worst-performing state, the study found. Other places that also received an F grade included California, Illinois and Washington, D.C. 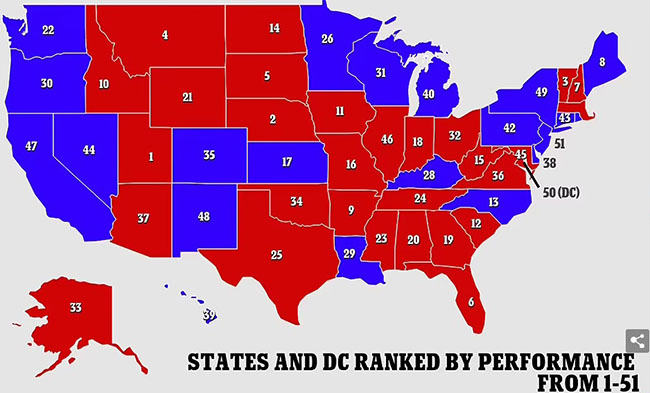 Nine out of the ten worst responses to the pandemic were in states with a Democrat governor. The tenth, Maryland, has a RINO as governor.

States that allowed their residents more freedom as coronavirus swept across the country fared much better over the last two years.

Florida was sixth best even though the Left consistently criticized Republican Gov. Ron DeSantis for keeping his state open and free.

Utah, Nebraska, Vermont, Montana and South Dakota were also praised by analysts for their pandemic response.

“The Republican-led areas — which dominated nine out of the top ten places in the study — have seen their economies remain strong and unemployment figures stay steady due to fewer restrictions,” researchers said.

The study judged states on their economy, education. and mortality and compiled a comprehensive list showing how they now stand as the coronavirus dies down.

On death rates, the report said: “One major study from researchers found that lockdowns increased all-cause mortality to a statistically significant extent. Whether or not political leaders can be considered responsible for mortality outcomes is therefore unclear, although advocates of a ‘focused protection’ strategy have suggested that sheltering the high-risk could reduce overall mortality — an approach adopted by Florida.”

The study found that the states that locked down businesses, churches, schools and restaurants for lengthy periods did not have lower death rates than those that largely remained open.

On the economy, the report took into account factors such as unemployment levels — which were directly impacted by COVID lockdowns, as well as gross domestic product – output — which was affected by lockdown measures. Montana, South Dakota and Utah were among states which fared best. Businesses in free states fared much better than those in locked-down blue states, the study found.

On education, the report said: “School closures may ultimately prove to be the most costly policy decision of the pandemic era in both economic and mortality terms. One study found that school closures at the end of the previous 2019-2020 school year are associated with 13.8 million years of life lost. Unlike mortality or economic outcomes, closing public schools was entirely under the control of policymakers. Almost all private schools were open.”

Another result of governors and unions keeping schools closed is being seen in high anxiety levels among young people, a Wall Street Journal report said.

All children should be screened for anxiety starting as young as 8 “as doctors and parents warn of a worsening mental-health crisis among young people in the pandemic’s wake,” the report said.

The draft guidance marks the first time the U.S. Preventive Services Task Force has made a recommendation on screening children and adolescents for anxiety.

“The pandemic added new stressors including isolation, disruption of routine and uncertainty. Some young people lost family members to Covid-19 and missed out on milestones like sports seasons, recitals and graduations,” the report said.

More than one-in-three high-school students reported experiencing poor mental health during the pandemic through June 2021, according to a Centers for Disease Control and Prevention survey of more than 7,700 students. About 44% said they had persistent feelings of sadness or hopelessness within the 12 months before the survey.

Another report on Tuesday highlighted a separate risk to teens that has recently intensified.

Federal data show drug overdose deaths among adolescents ages 14 to 18 nearly doubled to 954 in 2020 from a year earlier, researchers from the University of California, Los Angeles found. Partial year data show this group was on pace to record 20% more overdose deaths in 2021.

In the CDC report on youth mental health in the pandemic, about 20% of surveyed high-school students said that they had seriously considered attempting suicide in the 12 months before the survey.