[Editor’s note: The following is from a Facebook post by journalist Mark Tapscott, formerly of The Washington Times and Washington Examiner, now at The Epoch Times.]

I grew up in Oklahoma and was raised by lower middle class parents during a time when most everyone treated each other with respect. We didn’t eat fast food because it was considered a treat, not a food group. We drank Kool-Aid made from water that came from our kitchen sink with real sugar and Hi-C. We ate bologna sandwiches, PB&J & grilled cheese sandwiches, hot dogs, but mostly homemade meals consisting of mainly meat, potatoes, vegetables, bread, butter, and homemade dessert. 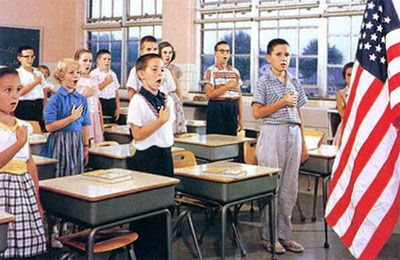 We grew up during a time when we mowed lawns, pulled weeds, babysat, helped neighbors with chores to be able to earn our own money.

We went outside a lot to play~Kick ball, football, basketball, fish, swim, ride bikes, frisbee, run with friends & played hide and seek. We drank tap water from the water hose outside… bottled water was unheard of. If we had a coke – it was in a glass bottle… and we didn’t break the bottle when finished…

We watched TV shows like Good Times, The Jefferson’s, Bonanza, Alf, Different Strokes, Full House, Leave It To Beaver, Flipper, Gilligan’s Island, Happy Days, Bewitched, The Brady Bunch, The Rifleman, Zorro, Daniel Boone, Looney Tunes, The Flintstones, The Jetsons, Sanford and Son, Dukes of Hazzard, WWF Wrestling, I Dream of Jeannie and I Love Lucy. After school, we came home and did homework and chores, before going outside or having friends over. We would ride our bikes for hours. We had to tell our parents where we were going, who we were going with, and be home when the street lights came on!

You LEARNED from your parents instead of disrespecting them, and treating them as if they knew absolutely nothing. What they said was LAW, and you did not question it, and you had better know it!!!

In school we said the Pledge of Allegiance, we stood for the National Anthem, and listened to our teachers.

We watched what we said around our elders because we knew if we DISRESPECTED any grown-up we would get our behinds whipped, it wasn’t called abuse, it was called discipline! We held doors, carried groceries, and gave up our seat for an older person without being asked. You didn’t hear curse words on the radio in songs or TV, and if you cursed and got caught you had a bar of soap stuck in your mouth.

“Please, Thank you, yes please, no thank you, yes ma’am, no ma’am yes sir, and no sir were part of our daily vocabulary!

You grew up to respect the Nation, and the flag.

Re-post if you’re thankful for your childhood, I will never forget where I came from and only wish children now days had half the chance at the fun and respect for real life we grew up with!

The world we live in now is just so full of crooked people, hate and disrespect for others!

Those where the Days my friend!

Mark Tapscott, Rare Washington journalist reflects on what was right with the America of yesteryear, WorldTribune.com

Rare Washington journalist reflects on what was right with the America of yesteryear added by Editor Two on June 14, 2022
View all posts by Editor Two →