Prof tries to explain in an op-ed why the UNC faculty is 12:1 Democrats

Democrats outnumber Republicans by 12 to 1 on the faculty at the University of North Carolina. The reason? Because most Republicans are climate change deniers.

That’s the logic being used by professor William Snider, director of the UNC Neuroscience Center. 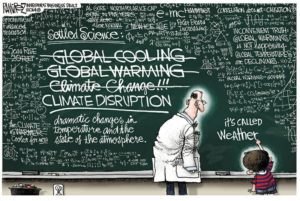 And if you don’t toe the prof’s line, well then you’re probably guilty of a “microaggression”.

In an opinion piece for The Charlotte Observer on Aug. 23, Snider explained that faculty members at the taxpayer-funded school “are overwhelming Democrats because of their fears of global warming — and because they believe too many Republicans are too skeptical of evolutionary theory,” The Daily Caller reported.

Snider noted in his opinion piece that North Carolina’s state Senate Majority leader, Phil Berger, has suggested that employment discrimination could be a reason that “Democrats outnumber Republicans 12:1 in faculty positions at the University of North Carolina.”

Snider responded that in “17 years of experience with hiring faculty at the School of Medicine at UNC-Chapel Hill, I have never heard political affiliation mentioned in any job search.”

The professor then searches for other reasons:

“One reason is the anti-science attitude adopted by many rank and file Republicans and supported by some Republican leaders,” Snider declares, citing a poll from three years ago showing that less than half of the Republican respondents “believe that humans have evolved over time.”

“Admittedly climate science is complicated,” Snider grants. “Most of us in the biomedical sciences don’t go into the primary data. However, we respect the conclusions of the overwhelming majority of scientists who are developing and testing climate models.”

“A recent joint report issued by the National Academy of Science in the U.S. and Royal Society in the U.K. clearly expressed the scientific consensus about the causes and dangers of global warning [sic] and emphasized the role of carbon emissions,” Snider lectures. “Most scientists cannot imagine that National Academy of Science or Royal Society members would participate in a conspiracy to manipulate data and conclusions.”

The professor maintains that he and his fellow Democratic colleagues on the taxpayer-funded UNC faculty want to debate issues “on merits rather than on rationale manufactured to appeal to a political base.”

Meanwhile, The Daily Caller noted, the UNC in June published a taxpayer-funded guide instructing students that Christmas vacations and telling a woman “I love your shoes!” are “microaggressions”.

Christmas vacations are a microaggression because “academic calendars and encouraged vacations” which “are organized around major religious observances” centralize “the Christian faith” and diminish “non-Christian spiritual rituals and observances.”

“The microaggression of liking shoes occurs when someone says ‘I love your shoes!’ for instance ‘to a woman in leadership during a Q & A after a speech.’ So it’s a very specific microaggression. The problem, the University of North Carolina document declared, is that the shoe admirer values appearances ‘more than intellectual contributions.’ ”

Additionally, The Daily Caller noted, UNC Chapel Hill is home to a “cultural competency workshop which instructs that white people are privileged because they can buy Band-Aids in ‘flesh’ color and have them more or less match their vaguely beige-hued skin.”

At least some students have apparently been required to participate in the workshop.