A new poll found Americans overwhelmingly think Mt. Rushmore should not be changed, closed, or destroyed as the woke mob and many leftist media outlets are demanding. 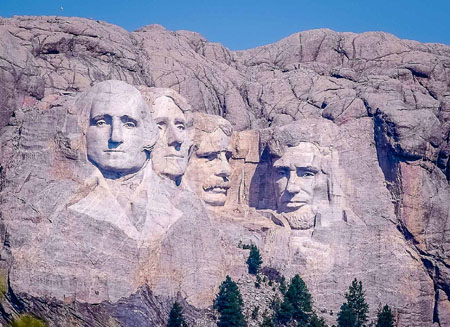 The Rasmussen Reports poll found three out of four voters (75 percent) said want the monument to remain as is.

Rasmussen found just 17 percent of voters surveyed believe the iconic monument should be closed or changed. A third of the younger voters in the poll said they back closing or changing Mt. Rushmore, compared to 10 percent of the above 40 respondents.

Rasmussen Reports conducted the survey of 1,000 likely voters on June 29-30. The margin of error is 3 percent, with a 95 percent level of confidence.

One of the leftist media outlets which is demanding Mt. Rushmore be changed, The New York Times, not surprisingly referred to President Donald Trump’s address at the monument “dark and divisive.”

Cornell Law School professor and media critic William A. Jacobson told Fox News: “The coverage of President Trump’s Mt. Rushmore speech was contrary to reality. It’s as if the media narratives were drafted long before the speech, and then rolled out immediately in disregard of the actual speech.”

Media Research Center contributor Clay Waters wrote: “Is there anything sillier than The New York Times in these Trump years calling anyone else’s tone ‘dark and divisive?’ They’re too self-importantly partisan to have any shame.”

“MSNBC debased itself Friday night with a vile display of hatred for America, the Constitution (except the freedom of the press), the Declaration of Independence, the Founding Fathers, and positive celebrations of both where the country has been and where we hope to go,” Houck wrote.

Washington Times columnist Tim Young told Fox News: “The few members of national media that hadn’t already shown their biased hand came out on the 4th of July to get involved in campaign 2020. There didn’t seem to be a single unbiased story on Trump’s visit to Mt. Rushmore.

“The most laughable part was when left-leaning media called Trump divisive for standing up against rioters and those destroying American cities,” Young added. “To left-leaning media, he’s the divisive one, not the person causing violence and pulling down statues.”