Kamala Harris will become president within the next four years if Joe Biden is elected in November, respondents said in a new poll. 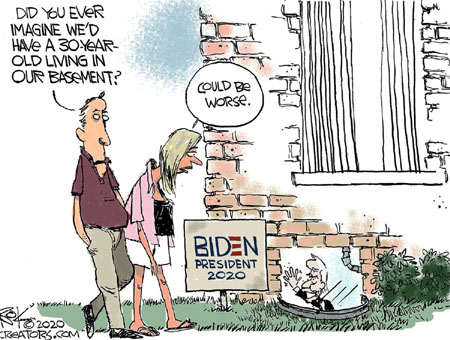 The poll found 39 percent believe Biden not finishing his term is “very likely.”

Just 35 percent consider it “unlikely” that Biden’s vice presidential choice will be president before his four-year term ends, but that includes only 14 percent who think it’s “not at all likely, Rasmussen Reports said.

Biden on Tuesday named Harris, a Democrat senator from California, as his running mate.

Even 49 percent of Democrats think it’s likely Biden’s vice president will become president in the next four years, although that compares to 73 percent of Republicans and 57 percent of voters not affiliated with either major party.

“The younger the voter, the more convinced they are that Biden is unlikely to finish a four-year term if elected president. But most voters in nearly every demographic category think it’s likely his running mate will become president in the next four years,” Rasmussen reports said.

The survey of 1,000 likely voters, which was conducted Aug. 6 and 9, also found that 38 percent, including 20 percent of Democrats, believe Biden, who would be 78 if he takes office in January, is suffering from some form of dementia. Sixty-one percent think it is important for him to address the dementia issue publicly.

The new national telephone and online survey found Biden with 48 percent support among likely voters to Trump’s 45 percent. Three percent prefer some other candidate, while another three percent remain undecided.

The previous survey showed Biden with a 48-42 advantage. The Democrat has led Trump in every Rasmussen weekly survey to date.