One year late, Fauci’s agency releases documentation for $826,000 in grants to Wuhan lab

Documents obtained by Judicial Watch from the Department of Health and Human Services reveal that, from 2014 to 2019, $826,277 was given to the Wuhan Institute of Virology for bat coronavirus research by the National Institute of Allergy and Infectious Diseases (NIAID), which is headed by Dr. Anthony Fauci.

The documents, some of which were redacted or withheld in their entirely, were obtained through a Freedom of Information Act (FOIA) lawsuit seeking records of communications, contracts and agreements with the Wuhan Institute of Virology in China. The agency is only processing 300 pages of records per month, which means it will take until the end of November for the records to be fully reviewed and released under FOIA. 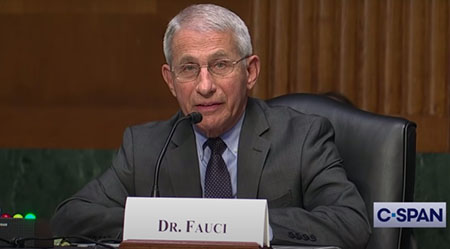 The records include a chart of NIAID funding to the Wuhan Institute of Virology sent on April 21, 2020, by NIAID’s Chase Crawford to Principal Deputy Director Hugh Auchincloss and other NIAID officials. The agency funds directed to the Wuhan Institute of Virology between the years 2014-2019 total $826,277. All of the projects listed in the chart are titled “Understanding the Risk of Bat Coronavirus Emergence.”

“These new documents show that funding for the Wuhan Institute was greater than the public has been told,” said Judicial Watch President Tom Fitton. “That it has taken a year and a federal lawsuit to get this first disclosure on COVID and Wuhan is evidence of cover-up by Fauci’s agency.”

Tabak: WH has strongly embraced concerns raised by Congressman Gaetz who is publicly criticizing HHS/NIH for funding the Wuhan laboratory’s bat research. Here’s this quote from another article: “I’m disgusted to learn that for years the US government has been funding dangerous and cruel animal experiments at the Wuhan Institute, which may have contributed to the global spread of coronavirus, and research at other labs in China that have virtually no oversight from US authorities.” [Emphasis in original]

This is a large multi-country study with Wuhan being one site. The principal investigator, Peter Daszak, is based in NY at EcoHealth Alliance, Inc.

Tabak provides details of the grant to Daszak for a project titled “Understanding the Risk of Bat Coronavirus Emergence.”

Tabak continues, saying, “The 3.7M dollar figure is over 6 years to all sites which include (several in) China, Thailand, Cambodia, Laos, Vietnam, Malaysia, Indonesia and Myanmar. We estimate that approximately $826,300 has been spent at this site since the inception of the grant. Yearly costs appear to be about 80K/year. The grant is in year 6 of a total of 10 year.”

A Jan. 9, 2020, email exchange labeled “high” importance between NIAID Senior Scientific Advisor Dr. David Morens and Daszak details the relationship between the Fauci agency and the Wuhan Institute of Virology:

Morens: Hi guys, do any of you have any inside info on this new coronavirus that isn’t yet in the public domain? Or any thoughts?

Daszak: Yes – lots of information and I spoke with Erik Stemmy and Alan Embry yesterday before the news was released. Erik is my program officer on our coronavirus grant specifically focused on China….

Daszak: NIAID has been funding coronavirus work in China for the past 5 years … (1R01Al110964: “Understanding the Risk of Bat Coronavirus Emergence” ). That’s now been renewed … Collaborators include Wuhan Institute of Virology (currently working on the nCoV), and Ralph Baric [of University of North Carolina].

Also-FYI, prior to the R01, we worked under an R01 with Eun-Chung Park as program officer on viral discovery in bats, where originally identified SARS-CoV as having a likely origin in bats (published in Science)….

Morens: Great info, thanks. Tony doesn’t maintain awareness of these things and doesn’t know unless program officers tell him, which they rarely do, since they are across town and may not see him more than once a year, or less…. Interested in your feeling about where this is going. The experts are buzzing around us are all over the map, between doomsday and not that big a deal, with everything in between.

On Jan. 23, 2020, senior NIH official Melinda Hoskins forwarded a Daily Mail article to colleagues discussing NIH/NIAID funding of the bat virus research, and noting that Fauci would be briefing senators the following morning. Hoskins says, “Would you please confirm the exact nature of our support to the Wuhan Institute of Virology/Biosafety Lab.”

Another official, Barbara Mulach, responds that, “We’ve identified one grant with a sub-grant to Wuhan Institute of Virology (thanks for the lead) and one primary grant to Wuhan University. We are trying to get clarification whether or not the two organizations are related so we know if the second application is relevant to the request or not.”

Mulach provides data showing a “Sub-award to Wuhan Institute of Virology,” with Daszak as principal investigator for a project titled, “Understanding the Risk of Bat Coronavirus Emergence,” and she provides information on another award, grant number R01AI119064-06, with principal investigator Ke Lan, going to Wuhan University and titled, “Versatile functions of LANA in KSHV pathogenesis.”

In an April 13, 2020, email from NIH official Emily Erbelding to NIH colleagues, Erbelding notes that the “entire amount of the new Daszak grant (year 6 funded in FY19) is about 3.64 M. The total amount that will go to Wuhan Institute of Virology under this grant will be about $750K ($76,301 had already been sent to Wuhan in year 1 according to the NOA).” Additionally, the email notes that bat sampling work done during years 2011-2015, in addition to receiving funding from Daszak’s grant, “could also have been supported by USAID Predict program (which was also funding the Wuhan lab).”

Auchinloss forwards Erberlding’s note to Fauci, saying, “This is higher but not extraordinarily higher than I originally indicated which was for some earlier work.” Fauci replies, “Thanks.”

In an April 15, 2020, email exchange, Tabak asks his colleagues if Daszak’s team had “published anything seminal related to the current pandemic.” Erbelding responds, “Peter’s only publication on SARS CoV2 since the epidemic began is thought piece in NEJM [New England Journal of Medicine]” to which she provides a hyperlink. She adds, “Note that all of the prior work on zoonotic reservoirs of CoV’s was also supported by USAID funding through a program called PREDICT, which has since ended.”

On Oct. 1, 2017, after receiving Daszak’s email related to his then-unpublished paper describing detailed research into a novel bat-born virus tied to Swine Acute Diarrheal Syndrome, Fauci forwards Daszak’s email and paper on to NIH official Greg Folkers, saying, “Confidential, but fyi for you.” Daszak says, “You should know that this work was supported by a NIAID ROl that [NIH’s] Erik Stemmy is the Program Officer for, and that I’m PI [principal investigator] on, with Zhengli Shi [the director of the Center for Emerging Infectious Diseases of the Wuhan Institute of Virology] as co-PI.”

A person whose name is redacted on April 19, 2018, CCs an email to “International Cables (HHS/OS)” with the subject line “China Virus Institute Welcomes More U.S. Cooperation on Global Health Security,” includes a U.S. cable: “China’s Wuhan Institute of Virology, a global leader in virus research, is a key partner for the United States in protecting global health security. Its role as operator of the just-launched Biosafety Level 4 (or ‘P4’) lab- the first such lab in China – opens up even more opportunities for expert exchange, especially in light of the lab’s shortage of trained staff. In the last year, the lab also hosted visits from the National Institutes of Health, National Science Foundation, and experts from the University of Texas Medical Branch in Galveston. The institute reports to the Chinese Academy of Sciences in Beijing.”

Officials described the lab as a “regional node” in the global biosafety system and said it would play an emergency response role in an epidemic or pandemic. The lab’s English brochure highlighted a national security role, saying that it is “an effective measure to improve China’s availability in safeguarding national bio-safety if [a] possible biological warfare or terrorist attack happens.”

Institute officials said there would be “limited availability” for international and domestic scientists who had gone through the necessary approval process to do research at the lab. They stressed that the lab aimed to be a “worldwide, open platform” for virology. They said they welcomed U.S. Centers for Disease Control (CDC) experts, noting that the Chinese Academy of Sciences was not strong on human disease expertise, having only focused on it in the last 15 years, after the SARS outbreak. A Wuhan-based French consulate official who works on science and technology cooperation with China also emphasized that the lab, which was initiated in 2004 as a France-China joint project, was meant to be “open and transparent” to the global scientific community. “The intent was to set up a lab to international standards, and open to international research,” he said. French experts have provided guidance and biosafety training to the lab, which will continue, the French official said. Institute officials said that France provided the lab’s design and much of its technology, but that it is entirely China-funded and has been completely China-run since a “handover” ceremony in 2016.

In addition to French assistance, experts from the NIH-supported P4 lab at the University of Texas Medical Branch in Galveston have trained Wuhan lab technicians in lab management and maintenance, institute officials said.… One Wuhan Institute of Virology researcher trained for two years at the Galveston lab, and the institute also sent one scientist to U.S. CDC headquarters in Atlanta for six months’ work on influenza.

Institute officials expressed strong interest in the Global Virorne Project (GVP), and said Chinese funding for the project would likely come from Chinese Academy of Sciences funding already earmarked for One Belt, One Road-related initiatives…. GVP aims to launch this year as an international collaborative effort to identify within ten years virtually all of the planet’s viruses that have pandemic or epidemic potential and the ability to jump to humans. “We hope China will be one of the leading countries to initiate the Global Virome Project,” one Wuhan Institute of Virology official said. China attended a GVP unveiling meeting in January in Thailand and is waiting for more details of the initiative. The officials said that the Chinese government funds projects similar to GVP to investigate the background of viruses and bacteria. This essentially constituted China’s own Virome Project …

U.S.-China Workshop Explores Research Partnerships: Some workshop participants also expressed skepticism about the Global Virome Project’s (GVP) approach, saying that gaining a predictive understanding of viruses with pandemic potential would require going beyond the GVPs strategy of sample collection, to take an “ecological” approach that considers the virome beyond vertebrate systems to identify mechanisms driving pathogen evolution. A follow-on workshop will be held in June at the University of Berkeley. NSF and NSFC hope to jointly announce a funding call for collaborative projects later this year.

A January 19, 2018, State Department cable from the U.S. Embassy in Beijing about the Wuhan Institute of Virology with the subject “China Opens First Bio Safety Level 4 Laboratory” includes a section titled “Unclear Guidelines on Virus Access and a Lack of Trained Talent Impede Research,” which notes in its introduction that “its current productivity is limited by a shortage of highly trained technicians and investigators required to safely operate a BSL-4 laboratory and a lack of clarity in related Chinese government policies and guidelines.”