Levin: ‘Greatest perpetrator against the American people [in 2016] was the federal government’

The following excerpts are from remarks by talks show host and former Justice Department official Mark Levin on Fox News ‘Hannity’ show, May 17, 2018.

The Mueller investigation oddly enough, Sean, has disclosed has revealed that the greatest perpetrator against the American people was the federal government, was the FBI, the CIA national intelligence director. … 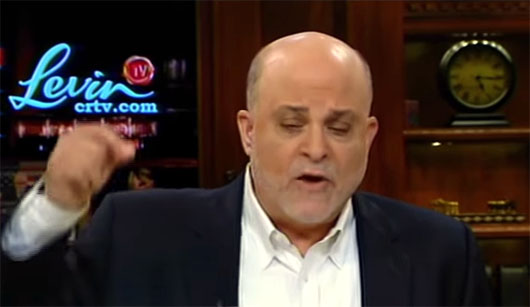 We cannot allow this to happen again. We saw our federal government used by the prior administration by the head of the CIA, by the head of the FBI, by the head of national intelligence and many, many others used to try and destroy the candidacy of an opposition candidate in another party, Donald Trump in the Republican Party. …

We’ve never seen anything like this before in American history.

The FISA court failed us. We have these national security letters that are supposed to be used in extreme circumstances being used, we have a cabal of FBI agents who took it upon themselves to investigate a candidate and his campaign, and then we have of course actual spies one or more in the Trump campaign.

What the hell is this? The Soviet Union, Venezuela? It’s the United States of America.

So let me say this. Once Mr. Mueller turns over his report to Mr. Rosenstein the president of the United States should do two things. He should take his favorite United States attorney not favorite because they’re pals but the most professional the most competent most aggressive he can and give him an assignment.

I also would tell him and I’ve said this before myself. We need to fix this. We cannot have another election where the federal government, our United States government, is interfering with an election.

And so what I think the president needs to do is appoint a commission of five or seven people, top notch men from prior administration and women and appoint them and say, fix the FBI at the top, fix the CIA, fix the intelligence agencies, we cannot allow this to happen to another president of the United States.

Not because we want to get even. Because we need an accounting. People need to be held to account, number one.

Number two, we need to fix these departments and agencies.