Domestic terrorism: Violent, criminal acts committed by individuals and/or groups to further ideological goals stemming from domestic influences, such as those of a political, religious, social, racial, or environmental nature. — FBI.gov

A journalist who has tracked every move Antifa makes says in an upcoming book about the anarchist organization that they will likely feel “legitimized” by a Joe Biden administration despite their role as the Left’s “shock troops” aiming for “violent revolution”. 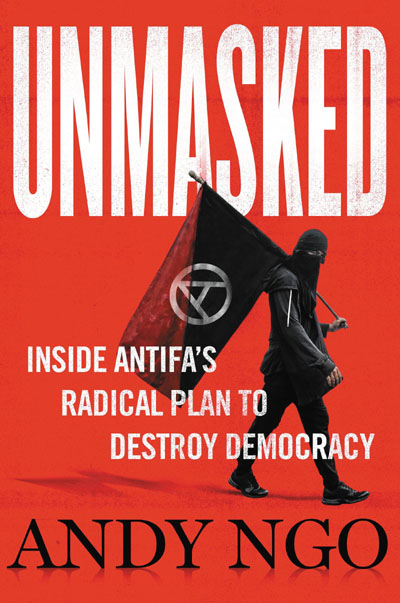 Andy Ngo is publishing his first book about the group, “Unmasked: Inside Antifa’s Radical Plan to Destroy Democracy“, which includes excerpts from the group’s training books and identifies its key leaders.

Book publisher Center Street said in promoting Ngo’s book that Antifa “will become even more influential in the Biden era by serving as the far-left’s shock troops to intimidate political opponents, undermine elections, and push for radical, violent revolution.”

“They will feel, in their own right, legitimized” to retaliate following the events at the U.S. Capitol last week, Ngo said.

The Washington Examiner’s Paul Bedard noted that Ngo “is a self-made Antifa expert and critic who has used his platform on Twitter, with 842,200 followers, and as editor-at-large at the Post Millennial to publicize the violence of the group, including his own beating and death threats from members.”

“People are responding like they’re very, very shocked,” Ngo said of the Jan. 6 breach of the Capitol. “And I’m wondering where the hell were you all when we had thousands of people for months in Portland try also to break into a federal building and to burn it down, actually. They came with Molotov cocktails, and, actually, they used ropes at strategic points to break down this reinforced barrier, and they tried to storm the building multiple times. They attacked police and damaged their eyes with lasers. Where the hell were your condemnations during that time? Why was I one of the lone voices?”

The Left has not only granted Antifa credibility, but is giving the anarchists carte blanche to push their agenda while intimidating any conservatives who question their tactics, Ngo said.

“My concern, in why I paint a grimmer picture toward the end of my future prediction, is because the longer goal and longer game that they’re playing has been really working to systematically mainstream fundamental tenets of their ideology,” he said.

That, Ngo added, includes “the mainstreaming of their argument that how you resolve your grievances is through violence, which is anathema to the enlightened principles that undergird a liberal democracy.”

Antifa held a protest in San Diego, Cal. yesterday where they also fought Trump supporters. One of the antifa held a sign saying Capitol Hill protester Ashli Babbitt deserved to get killed. pic.twitter.com/YTNOM7joCm

Small random selection of those arrested in Portland at BLM-antifa riots and violent protests in 2020. More than 90 percent of the 1,000 plus cases have been dropped by the prosecutor. The riots are still ongoing to this day. https://t.co/LJ1Wt8G7E3 https://t.co/N9Qwala8ep pic.twitter.com/jo7u02hVqV