Democratic governors are intent on keeping their state economies in lockdown while relying on Republican-controlled states to bail them out, radio host Rush Limbaugh said.

“I’ll tell you something else that’s starting to send red flags up. You probably have already noticed this. All these blue state governors that want to keep their states locked down, it’s purely political. But what are they depending on? They’re depending on the red states — the red states that are opening up! The red states are gonna get the economy kickstarted,” Limbaugh said on his May 12 broadcast. 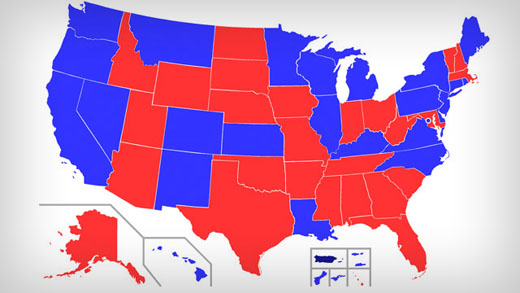 The red states will create the capital and money that will be transferred to blue states “while their population sits home, doesn’t work, waits for the federal check to show up — and they sit around and they trash the supposedly reckless red states. I cannot tell you how this irritates me,” Limbaugh said.

Governors such as Brian Kemp in Georgia “are doing the right thing. They’re trying to get their people back to work, for all the right common-sensical human and humane reasons — to protect lives — to protect livelihoods, the United States economy, the state economy,” Limbaugh said.

“And then you go to a blue state, and it’s the exact opposite.”

The blue state governors “want to remain locked down until July or August or whatever — and nothing’s gonna open and nothing is gonna happen,” Limbaugh said. “And they fully expect the red states to sit there and essentially pay for it. Folks, I’m gonna tell you, these next four months are gonna be a veritable war like we have not seen.”

The American Left and the Democrat Party are going to do their best “to keep this economy shut down, to extend and expand that shutdown — and blow up their own country’s jobs — just to ensure that Trump loses,” Limbaugh added.

Limbaugh continued: “But here’s the thing about that. Let’s do a little hypothetical. Let’s say this continues as it is, and let’s say that more and more red states open up and the economy in these states starts to return and revive.

“The blue states stay locked down. These are populous places — New York, Massachusetts, California. So they stay locked down all for the express purpose of canceling out the increase created by the red states. The economic activity that will happen from the red states going back to work, the blue state governors are gonna try to cancel it out by keeping their people at home.

“They expect all these red state people to say, ‘Oh, well, nice fair fight, you guys! Great to see you. We’ll see you the next election,’ put all of it aside, and try to all just get along again? What do they expect is gonna happen with this effort of theirs to ruin the U.S. economy? Do they think people are just gonna sit by and let it happen?”

The same Democrats who are intent in keeping the lockdowns going, are the same ones who “pass tax increases on the rich, and then end up shocked that the rich find a way around it,” Limbaugh said. “So here they’re gonna be engaged, these blue state governors and entire Democrat Party — and, by the way, we predicted this here. We predicted that it wouldn’t be long before the Democrats would start blaming Trump for the rotten economy because of the way he’s handled the virus.”

Limbaugh continued: “And right on schedule, they’re now calling Trump Herbert Hoover. Have you noticed that, Mr. Snerdley? They’re all… Ed Markey, they’re all over the place. Trump is Herbert Hoover. Herbert Hoover was the Republican president at the time of the Depression. There’s no comparison. Unfortunately, because of the lack education of this country, nobody knows who Herbert Hoover is, particularly on the Left.

“They think they can go out and even try to ruin the economy — and at the end of it, we’re all just gonna be brothers and sisters and say, ‘Okay. Let’s now work together to heal.’ I can’t believe that that’ll work, but time will tell.”