A federal judge in Syracuse has ruled that multiple provisions in New York’s gun licensing law passed this year are unconstitutional. 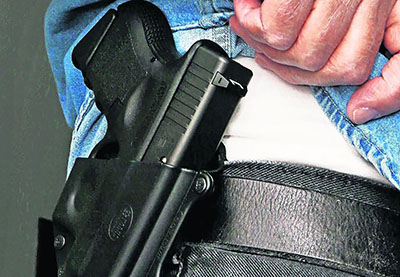 U.S. District Judge Glenn Suddaby on Thursday struck down key elements of the state’s attempt to rewrite its handgun laws after the old laws were struck down by the U.S. Supreme Court in June.

The law went into effect on Sept. 1.

The judge ruled that New York can’t ban people from carrying guns in New York City’s subway system or Times Square, though he said it did have a right to exclude guns from certain other locations, including schools.

Several of the state’s new licensing rules went too far, he wrote, including one that required applicants to be of “good moral character,” and another that made applicants turn over information about their social media accounts.

“Simply stated, instead of moving toward becoming a shall-issue jurisdiction, New York State has further entrenched itself as a shall-not-issue jurisdiction. And, by doing so, it has further reduced a first-class constitutional right to bear arms in public for self defense … into a mere request,” wrote Suddaby.

“Anti-gunners are trying to find loopholes to circumvent the Supreme Court’s Bruen decision from earlier this year that reaffirmed your God-given right to keep and bear arms,” Pratt said in a statement on the Gun Owners of America website. “That’s why we’re fighting so hard to OVERTURN New York’s draconian gun control law that puts virtually the entire state off limits to concealed carry permit holders.”