Members of the leftist media are not only relentlessly pushing the narrative that conservatives are the “enemy within,” but some have taken to literally stalking the targets of their “reporting.”

Critics say that two recent incidents show that these leftist “journalists” have not only abandoned objectivity, but humanity as well.

• Jason Nguyen, a “reporter” for ABC’s Salt Lake City outlet, filmed himself going to the residence of a paramedic who works for West Valley City Fire Department. Nguyen stalked the paramedic for donating $10 to the defense fund of Kyle Rittenhouse.

• A USA Today “reporter” contacted a Florida man to harass him about his donation to GiveSendGo which went to help a conservative who was injured in December by violent leftists in Washington, D.C.

In his report on live television, Nguyen showed up at the paramedic’s home and also contacted his employer about the donation.

The Utah paramedic was one of the many individuals exposed in the data breach of a Christian crowdfunding website. Rittenhouse, 18, is out on bail after being accused of killing two individuals in Kenosha, Wisconsin. His trial is expected to begin in November.

The Federalist’s Gabe Kaminsky noted in an April 19 analysis that the paramedic “did not break the law by donating to the defense fund. He was exercising his constitutional rights and providing funding — a minimal amount at that — to an individual who has not yet been proven guilty in the court of law. It is unclear what the reporter deemed was newsworthy about using hacked data to track down a private citizen, or what exactly he was hoping to accomplish by contacting” the paramedic’s employer.

NewsBusters managing editor Curtis Houck noted: “Far too many journalists are willing to destroy the life of a private citizen doing nothing and bothering no one at a moment’s notice. It’s frightening and un-American,”

Independent journalist Glenn Greenwald wrote: “Some journalists go to war zones. Some confront security state agencies and repressive regimes. Some uncover the fraudulent schemes of Wall Street tycoons. And then some bullies abuse the profession to harass and expose private, powerless people.”

In the Florida case, a state resident told Gateway Pundit he received an email from USA Today “reporter” Will Carless inquiring about an alleged donation the man made to a fund that raises money for medical expenses for the Proud Boys.

The man wrote to Gateway Pundit: “I am resident of Naples, Florida and saw your article about the Utah reporter harassing the paramedic. Despicable. However this reminded me of an email I received a few weeks ago which I have attached below. I donated money on givesendgo for medical expenses to brothers who were stabbed in DC back on 12-12-20. I know I’m not the only one that got this email and they are trying desperately to destroy conservatives.”

Carless, who boasts about covering “extremism and emerging issues nationwide,” sent the man the following email: 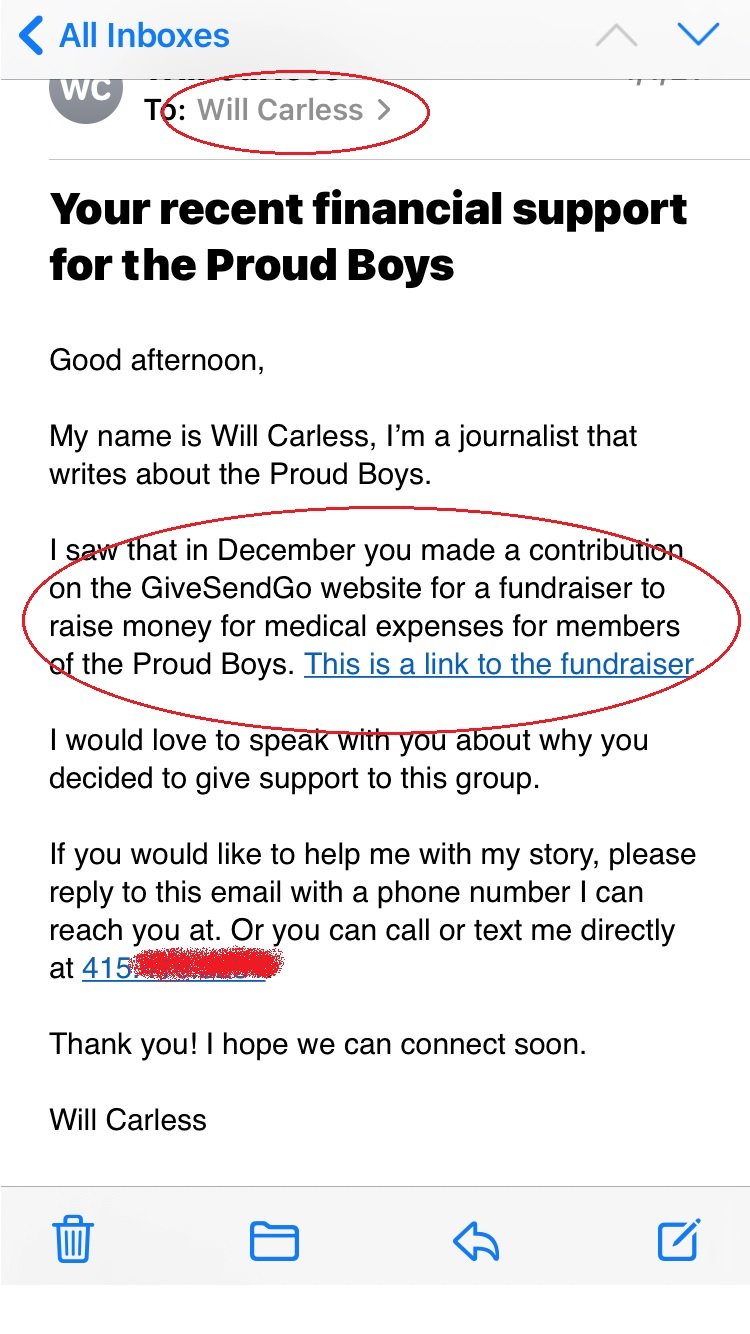