Joe Biden’s handlers likely kept him away from last weekend’s Army-Navy football game to avoid the optics of the 79-year-old shuffling onto the field amid chants of “Let’s go Brandon”.

If Team Biden is fully determined to shield Biden from the chant, they may have to return him to the basement for a while because it seems “Let’s go Brandon” is still quite the thing. 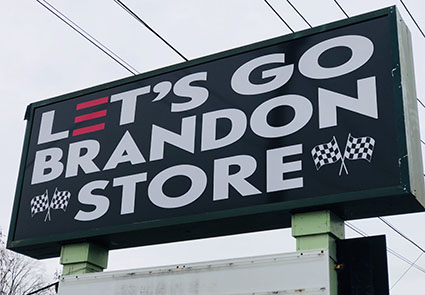 It began as a chant, then became a hit song, and now “has given rise to a chain of stores in New England,” Washington Times reporter Valerie Richardson noted on Dec. 13.

“Sales are very good. We’ve got a lot of support. There’s a lot of excitement,” Keith Lambert, founder of New England for Trump and brainchild of the stores, told The Washington Times. “People absolutely love coming out. Being in the atmosphere of a store, it’s a lot of fun.”

As the chant became popular, Lambert said he got the idea to retool his New England for Trump shops to ride the Brandon wave.

Lambert now has Massachusetts locations in North Attleboro, Somerset, Bellingham, Easton, Hanson and East Bridgewater and a shop across the state line in Warwick, Rhode Island.

Also thriving is the Let’s Go Brandon online shop. After a segment about the stores aired last week on Newsmax, the website at nefortrump.com was overwhelmed with traffic.

“We’ve hired a bunch of people, probably about 12 to 15 people,” Lambert said. “For the most part, everybody’s happy, and it’s bringing people into the area.”

Former President Donald Trump has jumped on the bandwagon. His online store now sells hats and T-shirts with the “Let’s Go, Brandon” slogan, which it calls “the most popular chant on the planet.”

Biden fans (remember, there are supposedly 81 million of them), who are not a jubilant bunch generally, are a lot less jubilant about “Let’s go Brandon”.

A boat festooned with lights spelling out “Let’s Go Brandon” and “FJB” won the annual Yorktown Lighted Boat Parade contest Dec. 4 in Virginia. The vessel was later disqualified for displaying a political message.

The Yorktown Foundation issued an apology: “To all the spectators in Yorktown on Saturday night, we apologize about the disruption to the holiday festivities, and we especially apologize to our family and friends in attendance that may have had to explain to their children the political nature of the message.”

“Like other major online retailers, we operate an online marketplace that allows outside third-party sellers to offer merchandise to customers through our eCommerce platform,” Walmart told Insider. “We have reviewed these third-party marketplace products and they will be removed because they do not comply with our policies.”