Is the fix in again? Bernie backers fear it may be 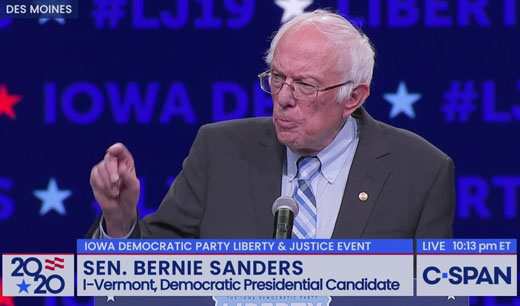 Sanders’ supporters “have been stricken with an acute case of paranoia about the Democratic Party hijacking the nomination from their guiding light at the national convention this summer,” Seth McLaughlin and David Sherfinski wrote in a Feb. 13 analysis for The Washington Times.

Sanders has warned about what could happen with a brokered convention.

“The convention would have to explain to the American people: ‘hey, candidate X, you know, kind of got the most votes and won the most delegates in the primary process but we’re not going to give him or her the nomination,’ ” Sanders told MSNBC. “I think that would be a very divisive moment for the Democratic Party.”

Republicans have not hesitated to stoke the flames of a brokered convention.

“Can you imagine what that would look like?” Corey Lewandowski, former Trump campaign, said in an op-ed for the Hill Newspaper. “Bloomberg handing out stacks of cash to delegates on the floor. Mayor Pete running from delegation to delegation, campaigning like the would-be president of his college politics club. Joe Biden wandering in circles.”

“And the party figureheads, the ‘superdelegates,’ thinking to themselves how Bernie isn’t fit to be the nominee and maybe running Hillary a second time is the best idea,” Lewandowski added. “I might buy a ticket to that convention.”

The Bernie-bros continue to believe the 78-year-old socialist won’t get a fair shake from the DNC despite party bosses rewriting the nomination rules, including scaling back the influence of the “superdelegates” who backed Hillary Clinton en masse in 2016, the analysis said.

Shaun King, a top Sanders surrogate, has questioned whether Sanders’ rivals will support him if he enters July’s Democratic National Convention in Milwaukee with a plurality of support, but not enough delegates to secure the nomination on the first ballot.

To win the nomination outright, a candidate needs at least 1,991 of the 3,979 pledged delegates in the primaries.

If they fail to get the necessary number of delegates on the first ballot, then two things happen in round two, the Washington Times analysis noted: “The 771 ‘superdelegates’ who were relegated to the sidelines under new DNC rules will get a say and all of the pledged delegates that were bound to a certain candidate based on the primary or caucus results in their home states would be free to support whomever they wished.”

If it were to get to a second round of voting at the convention, a candidate would need a majority from a bigger pool of delegates, 4,750.

“Any attempt by the Democratic Party establishment to gang up on Bernie Sanders would backfire,” he said. “Even if party bigwigs were able to stop the senator from Vermont, it would backfire and increase his support now and later alienate his supporters who might not vote in November.”

Dale Kistler-Collins, a 29-year-old from Denver who drove to Iowa to volunteer for Sanders, predicted the Vermont senator will have at least 40 percent of the delegates by the time the convention opens on July 13.

“If we get to the point where everybody takes all of their delegates and puts them into Biden, or Pete or Warren, we are not going to show up,” he said.

Unlike the Republican primaries, Democratic presidential primary races do not have any winner-take-all contests. That is why, in the early going of the primary season, Pete Buttigieg has more delegates than Sanders despite Sanders having won more votes.

“Instead, the delegates are awarded on a proportional basis, making it harder for candidates that appeal mostly just to one part of the party — including perhaps Sanders, who has struggled to win over center-left voters,” the Washington Times analysis said.

Delegates are doled out to candidates that amass at least 15 percent of the vote statewide or in an individual congressional district.

Sanders is well-positioned to add to his delegate count in the Feb. 22 Nevada caucuses and the Feb. 29 South Carolina primary.

“He also has a good chance to create some distance with the rest of the field on Super Tuesday primaries March 3 when 14 states hold contests. For example, he has consistently led polls in California, where the biggest cache of delegates, 415, are on the line Super Tuesday,” the Washington Times analysis said.

The contests on Super Tuesday will be the first involving Mike Bloomberg, who has invested over $200 million into an advertising campaign and is thought to have entered the race in part to block Sanders from the nomination.

Sanders said it would be “very divisive” if a candidate who headed into the party’s convention with a solid plurality of delegates didn’t end up as the nominee.

“In general, I think it is a fair statement to say that it would be very divisive,” he said this week on MSNBC. “You have to take a look at the whole nature of the campaign and a whole lot of factors within the campaign that we don’t know yet.”