Fleitz among first to smell a rat on Ukraine story; He was right, CNN was wrong

When former White House official Fred Fleitz suggested in an Oct. 2 appearance on CNN’s Cuomo Prime Time that Rep. Adam Schiff knew about the Trump-Ukraine “whistleblower” complaint in advance, he was scoffed at by host Chris Cuomo. 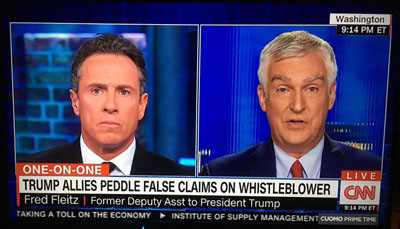 Fleitz, a member of the WorldTribune.com board of advisors, drew on his own experience with whistleblowers in flagging the Trump-Ukraine source as “very unusual.”

Fleitz told Cuomo: “When I saw this one, I thought it was very unusual, not just that it was extremely well written, but it had legal references and footnotes. That was a little bit unusual, but I compared that with the fact that Adam Schiff was talking about the subject matter of this complaint throughout the month of August. He posted a tweet at the end of August that almost identically reflected this complaint.”

Cuomo shot back: “But you don’t know any of that. You’re raising it as questions. You know that is meaningless unless you can put some meat on the bones. Of course the Republicans are agreeing with you. That’s the whole state of play. Anything you say that’s negative about this guy or this woman they’re going to pick up on.”

When news broke on Oct. 3 that Schiff, California Democrat and chair of the House Intelligence Committee, did know about the whistleblower’s complaint prior to its release, Fleitz took to Twitter to tell Cuomo an apology was “not necessary.”

“You were pretty hard on me last night on @CNN last night @ChrisCuomo when I told you that I assessed @RepAdamSchiff probably knew about the CIA whistleblower in advance,” Fleitz tweeted. “We now know from the NYT that I was right. Apology not necessary.”