The FBI has dispatched surveillance teams after several reports surfaced of Christian Nationalists planning to spend a day thanking God for His blessings and praying for America. 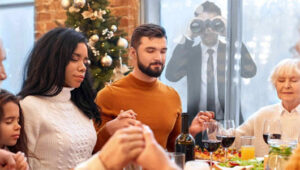 “Looks like the turkey’s hit the table, boys,” reported Agent Schwartz to the tactical team. “That means the praying will be inbound shortly if I know these sickos like I think I do.”

The FBI has reported a massive increase in Christian Nationalist activity as of late, with many in the Bureau expecting a widespread show of force on Thanksgiving. “The entire Thanksgiving holiday is basically a dog whistle for Christian Nationalists,” explained FBI Director Christopher Wray. “Here we have a holiday declared by Abraham Lincoln, one of the most famous Christian Nationalists ever, meant to be entirely dedicated to thanking God for our country and praying God’s guidance for her future.” ….

“We’ve got three generations of terrorists present — maybe four, that old terrorist on the walker is moving slow,” said Agent Schwartz. “Sure is sad to see the little ones getting indoctrinated like this. Next thing you know, that baby will be storming the Capitol, mark my words.”

FBI on alert amid reports of widespread Christian Nationalist activity added by Editor One on November 23, 2022
View all posts by Editor One →