Under the guise of Parler’s alleged promotion of the Jan. 6 “insurrection” at the U.S. Capitol, Big Tech coordinated to shut down the free speech social media platform.

As it turns out, Facebook was “far and away” the preferred platform for those who pre-planned the breach of the Capitol building, a report noted. 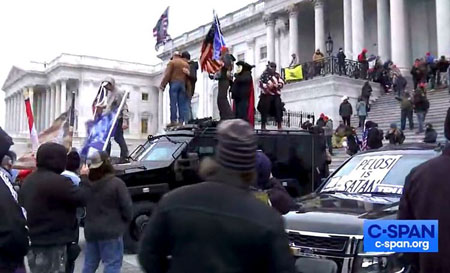 Department of Justice arrest reports related to the events at the Capitol on Jan. 6 show that Facebook “is the overwhelming ‘winner’ in the violence-spreading, hate speech-permitting social media landscape. YouTube and Facebook-owned Instagram were close seconds and thirds,” Legal Insurrection reported on Feb. 10.

“It’s becoming increasingly clear that the coordinated Big Tech effort to kill Parler was not in any way related to some noble goal of quelling right-wing violence and ‘insurrection’ plotting,” Legal Insurrection noted. “After all, the alleged violence and plotting were clearly conducted for the most part on the very Big Tech platforms that targeted and attempted to destroy Parler.”

Forbes reported on Feb. 7 that Facebook was used by 73 of the people charged with crimes in the Jan. 6 riot, more than all other social media sites combined.

Parler was banned from using Amazon’s online infrastructure in the wake of the riot due its alleged connection to the violence, but was only used by eight people charged, Forbes reported. Both Apple and Google removed Parler from their app stores.

Sandberg was later criticized for downplaying her employer’s role as a platform for the organizers of the siege. But Facebook was far and away the most cited social media site in charging documents the Justice Department filed against members of the Capitol Hill mob, providing further evidence that Sandberg was, perhaps, mistaken in her claim. Facebook, however, claims that the documents show the social media company has been especially forthcoming in assisting law enforcement in investigating users who breached the Capitol.

Legal Insurrection noted that Facebook “is the DOJ-documented favored platform of the Capitol rioters thus far charged; they plotted there, they celebrated there, they bragged about their lunacy there. Meanwhile, Parler was deplatformed for merely being suspected of this dubious distinction, but we all know that Facebook won’t get the same treatment.”