A team of data scientists told the Georgia Senate Judiciary Subcommittee on Wednesday they had proof that more than 30,000 votes were removed from President Donald Trump’s Nov. 3 tally in Georgia an another 12,173 votes were switched to Joe Biden

The team testified at the hearing that they found time-series election data showing Trump’s votes were decrementing in various counties instead of increasing as they do normally. 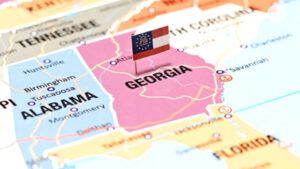 At least 30,593 votes were removed from Trump, including 17,650 votes in Dougherty County (see graphic below), 7,008 votes in Dodge County, and 5,935 votes in Putnam County, the data analysts testified.

Biden leads Trump in Georgia by less than 13,000 votes.

The removals happened at the county level and were hard to be observed at the state level because the decrements were offset by accurate data uploaded by other counties.

“I want to make that very, very clear that at no point in an incremental process, should you decrement it,” Justin Mealey, a former data analyst and programmer for the CIA and National Counterterrorism Center, told the panel.

“The voting will of the people of Georgia is not reflected in what was certified by the secretary of state,” Mealey said.

The analysts said a large number of Trump votes were also observed being switched to Biden in a separate event. A “clear example of vote switching” happened in Bibb County, they said.

In this single event, 12,173 votes were switched, according to the data scientists.