The arrest of WikiLeaks founder Julian Assange in London followed by the unsealing of his indictment and requested extradition by the U.S. government have given rise to a frenzied debate among advocates of the Free Press and First Amendment guarantees.

But conservative media critics cited by this online international newspaper and the Free Press Foundation said that the American Free Press had long been fatally compromised by partisan media monopolies.

A summary report on the reaction to Assange’s arrest by the Guardian quoted the Intercept’s Glenn Greenwald and Micah Lee who warned that Assange’s indictment “poses grave threats to press freedoms, not only in the U.S. but around the world.”

Longtime Assange lawyer Barry Pollack charged that the “factual allegations … boil down to encouraging a source to provide him information and taking efforts to protect the identity of that source. Journalists around the world should be deeply troubled by these unprecedented criminal charges.”

Greenwald and Lee argued that Assange’s indictment “characterizes as a felony many actions that journalists are not just permitted but required to take in order to conduct sensitive reporting in the digital age.

“But because the DOJ issued a press release with a headline that claimed that Assange was accused of ‘hacking’ crimes, media outlets mindlessly repeated this claim even though the indictment contains no such allegation. It merely accuses Assange of trying to help Manning avoid detection. That’s not ‘hacking.’ That’s called a core obligation of journalism.”

The Free Press Foundation in its mission statement notes that “Ironically, some of the great news organizations that prospered as champions of the free press in the United States have become monopolies. In the process they lost not only the thrill of competition but also respect for diverse points of view.

“ ‘Narratives’ pushed by special interests have replaced reporting. Bias in presentation and topics covered is blatant. The Democrat Party agenda is heavily favored by most corporate media outlets, and alternative presentations counter with a bias of their own.” 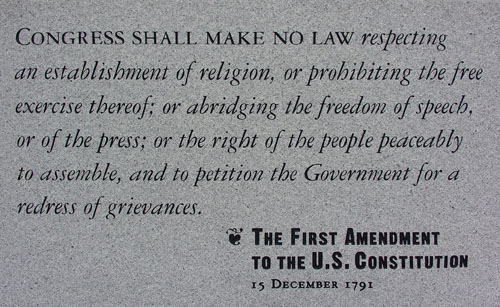 In an April 12 column titled “The liberal media ‘Matrix’ ”, Matthew Continetti, editor in chief of the Washington Free Beacon, noted that “there is also the question of how we perceive ‘the news’; how established media institutions present and frame information.”

Continetti pointed to “some of the headlines we’ve encountered since the beginning of this year”:

Continetti wrote: “As the influence of establishment media outlets has waned, their attempts to control the narrative have intensified. The cable networks and major print outlets have become more politicized, not less, as social media and streaming video make it much easier to expose hoaxes and puncture holes in the received wisdom. The Sentinels who protect the liberal media matrix are vigilant against thought crime, they anathematize dissent, but they are less interested in the canons of professional journalism, such as presenting both sides of a story and refraining from baseless speculation.”

Free Press Foundation publishes a news service, Free Press International for “citizen journalists [who] have decided to correct or supplement the record on their own initiative. Such independent publishers of news sites, social media pages, podcasts and other formats are the heroes of the 21st-century media revolution. Such media validate perspectives that would otherwise be silenced.”