The Democrat operatives employed as “fact-checkers” by Joe Biden’s campaign wing known as the major media have looked into whether Biden actually did call young black men “super predators” when he was advocating for his Crime Bill in the Senate during the Clinton administration. 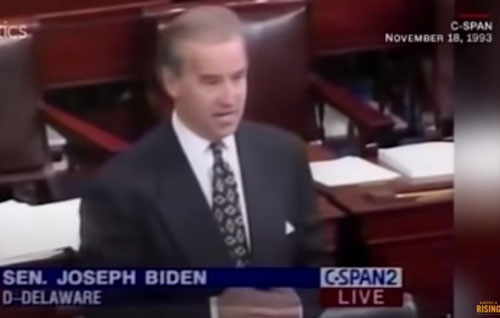 The Biden backers in the media immediately went to work and called on the “fact-checkers” to vet Trump’s tweet.

The fact-checkers have spoken: Biden did not say young black men are “super predators.”

He said young black men are “predators” who are “beyond the pale” and are “anti-social sociopaths.”

The fact-checkers have again uncovered the truth. And it is that Corn Pop was a “predator” and not a “super predator.”

Biden, who once worried that his children would grow up in a “racial jungle” if busing were enacted, worked hand-in-hand with segregationists to pass the Crime Bill which led to the mass incarceration of young black men.

“It doesn’t matter whether or not they’re the victims of society,” Biden said in 1993, adding, “I don’t want to ask, ‘What made them do this?’ They must be taken off the street.”

In a 1994 speech on the Senate floor, Biden compared himself to a Republican president: “Every time Richard Nixon, when he was running in 1972, would say, ‘Law and order,’ the Democratic match or response was, ‘Law and order with justice’ — whatever that meant. And I would say, ‘Lock the S.O.B.s up.’  ”

While the “fact-checkers” scramble to cover up Biden’s racist past, have they forgotten that the Internet is forever?