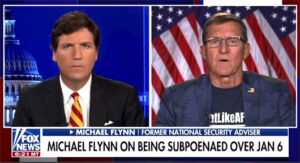 “It shows the speed with which the Democrat Party is moving to confirm their complete takeover of this country,” Flynn said.

“There’s no other way to put it,” he continued. “We can’t kid ourselves.”

Flynn has been speaking to large groups around the country who he said are “fed up.” He added that he would comply with subpoenas from the January 6 Commission and that he had nothing to hide.

But Americans are looking for leadership from the Republican Party and are not seeing it, he said.

“When does this stop or will it ever stop? I actually don’t see it stopping.” Flynn said Republicans need to step up because the Left “owns the media, they own the tech titans. They have the ability to control the message.”

General Flynn: “It shows the speed in which the Democratic party is moving to confirm their complete takeover of this country.” pic.twitter.com/mgEbGxOKoV

This is nuts. The FBI is LEAKING O’Keefe’s privileged info to the NYT.