Finally, Russians are considering burying Vladimir Lenin. Since his death in 1924, the Bolshevik leader’s embalmed body has been lying in a glass coffin in a mausoleum on Moscow’s Red Square. For many, he is the shining symbol of Soviet communism — a martyr to the utopian cause of socialist revolution. However, he is the very opposite: the embodiment of a murderous, totalitarian ideology responsible for the deaths of tens of millions. The issue is not whether he should be buried, but what has taken so long? This is Russia’s shame.

Russian authorities may finally be taking action. This week, a story in The Washington Times by Marc Bennetts reports that Russia’s Culture Minister Vladimir Medinsky is contemplating whether to lay Lenin’s body to rest. 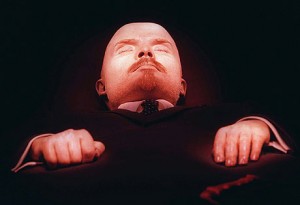 “I have always believed that a body should be entrusted to the earth,” Mr. Medinsky said. “And Lenin’s relatives begged the authorities not to place him in the mausoleum.”

Lenin was not simply a prominent leader of the 1917 Bolshevik Revolution. He was its founder, and driving political and intellectual force. Without him, the communist seizure of power would have been impossible. With the collapse of the Soviet Union in 1991, Lenin’s body should have been buried along with his failed communist regime.

Instead, as Mr. Bennetts points out, Lenin’s tomb has become a shrine for many Russians still nostalgic about the Soviet empire. From Moscow to the Urals, the Bolshevik dictator is still revered. Rock bands, subway stations, libraries, regional administrations, statues, monuments — Lenin’s name and image remain prevalent, signifying his continued prestige. The U.S.S.R. is dead, but his cult of personality is alive and well.

This is why numerous Russians continue to oppose burying him. According to Andrei Vorobyov, a senior official in the ruling United Russia party, the issue is a “hot one.” Even Mr. Medinsky believes that Lenin should be buried with “full state honors,” and the Red Square mausoleum converted into a giant museum commemorating the Soviet past. Russian strongman Vladimir Putin uncharacteristically claims to be neutral on the issue, arguing the “people should decide.”

The Russians should be ashamed of themselves. Lenin’s shrine must go. But burying him with the pomp and ceremony of a state hero is an insult to his countless victims. It is akin to the Germans giving Adolf Hitler a send-off with “full state honors.” It reflects a profound moral sickness in modern Russia, an ability to confront the Soviet past.

Lenin was the architect of the greatest system of mass murder in history. He belongs alongside genocidal tyrants, such as Josef Stalin, Mao Zedong and Hitler. In fact, Lenin gave birth to both 20th century communism and Nazism. Contrary to myth, he was not some misguided compassionate socialist, whose ideals exceeded the capacity of humanity to reach. Rather, he was a ruthless despot who created one singular, malevolent invention: the totalitarian state.

Lenin grabbed and maintained power by waging relentless war upon his domestic opponents (both real and imagined). He fused state terror with one-party rule in an unprecedented bid to completely transform every aspect of society. His goal was not just a proletarian revolution. It was to remake human nature itself — to create, what he called “New Soviet Man.” The socialist dream of human equality and liberation — of a new order without capitalism, nation-states and religion — required omnipotent state control and wholesale social destruction.

The result was genocide, the deliberate extermination of tens of millions. From 1917 until his death in 1924, Lenin established the Soviet empire through absolute brutality — the creation of the Cheka (the Bolshevik secret police and predecessor to the KGB), the confiscation and nationalization of all private property, the slaughter of millions of White Russians and other enemies of the regime, a terror famine that systematically starved to death over 5 million “kulaks” (small peasant landowners), the annihilation of countless Christian churches and priests, the savage repression of basic freedoms, the building of a vast network of gulags, and the imperial subjugation of numerous peoples yearning for their national independence. In short, Lenin erected the one-party totalitarian model later followed by Stalin, Hitler and Mao.

Lenin’s great sin — inherited from the Enlightenment — is that he viewed individuals as a means to an end; he never recognized or cared for their innate worth and dignity. He believed that a small ruling class of experts could reorder society to fit his ideological socialist ambitions. For him, people were nothing more than a piece of clay to be molded into a futuristic, post-capitalist, post-Christian world. He was a revolutionary fanatic.

His Marxist offspring would eventually butcher nearly 100 million people in an insane attempt to fulfill Lenin’s twisted goals. Ukrainians, the Baltic peoples, Poles, Czechs, Slovaks, Hungarians, Romanians, Croats, Serbs, Chinese, Cubans, Nicaraguans, Cambodians and the Vietnamese — if one could pile up all the corpses killed by communism it would reach the sky.

It is high time that Russians confront the dark reality of their Soviet past. Like Nazi Germany, Soviet Russia was more than an iron-fisted dictatorship. It was a totalitarian police state and expansionist empire based upon almost unspeakable atrocities. The Soviet hammer and sickle is the equivalent of the Nazi swastika; Lenin was just as evil and odious as Hitler.

Yet, could anyone imagine Hitler’s name being used — and revered — across Germany today? Or that a mausoleum with his embalmed body could lie at a major square in Berlin as a shrine for neo-Nazis? The very thought is disgusting, even unfathomable. Fascism’s crimes have been rightly condemned. Those of communism, however, remain unanswered, confined to the deep recesses of our collective historical memory. This must end.

Lenin was a dictator, a genocidal killer and a war criminal. Bury this man — once and for all. And skip the state honors. He doesn’t deserve it.

Bury Lenin, skip the state honors and hold his cult accountable added by Editor One on July 13, 2012
View all posts by Editor One →