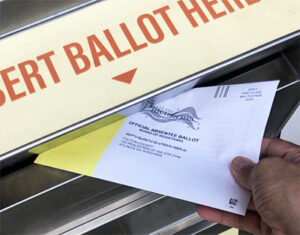 Solomon cited a memo with “29 pages of really shocking election-integrity-busting behavior by the Atlanta vote-counters” that included instances of “piercing the privacy of people’s ballots” and “transporting ballots in an insecure way.”

Despite multiple questions about conflicts of interest involving Raffensperger and to Georgia officials, Solomon noted that “he called out Fulton County on election night on television but it just didn’t break through” in any of the media reports. Now public support is growing for a full forensic audit of the Nov. 3, 2020 election in the state as well as the subsequent Senate runoff elections.

Related: Who is Georgia’s Secretary of State Brad Raffensperger and what are his ties to Dominion Voting Systems?, December 8, 2020

The monitor’s report noted that, at one point, an election worker allegedly witnessed a conversation in an elevator during which one of the workers revealed his intention to “f*ck sh*t up” at the ballot-scanning operation.