Who is Georgia’s Secretary of State Brad Raffensperger and what are his ties to Dominion Voting Systems?

Documents from evaluations of the systems bidding to replace Georgia’s old system showed two other systems, ES&S and SNS, had scored higher on quality and security and had bid more than Dominion. Georgia had budgeted $150 million for a new system. Dominion bid $107 million. Raffensperger chose Dominion. 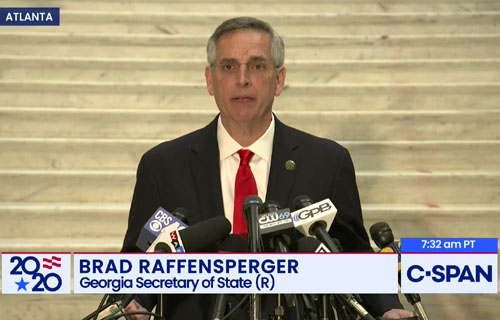 “Every business person knows to be suspicious of the lowest bidder, here Dominion was the extreme low bidder for Georgia,” the Geller Report noted.

“There should be an investigation, a thorough criminal investigation, frankly, of everyone involved in acquiring the Dominion [Voting] System for the state of Georgia,” attorney Sidney Powell said.

An Aug. 19, 2019 letter to Raffensperger seeking a re-examination of the use of Dominion machines was signed by over 1,450 Georgia voters from 100 counties.

The letter stated that “numerous deficiencies” in the Dominion system required an immediate re-examination for the state’s use of the machines.

Georgia Election Code Rule 590-8-1-.01, “Certification of Voting Systems,” specifies the rules and procedures by which voting systems may be certified in Georgia. However, the process by which the Dominion System was certified on August 9, 2019 failed to comply with these rules.

Other deficiencies pointed out in the letter include:

“During the reexamination of the Dominion Voting System, we ask that the evaluation consider the reports on this system by the State of Texas professional examiners who unanimously rejected the Dominion System in January 2019. The findings are listed in reports. The testing failures included the complexity of configuration and ballot adjudication services crashing, as well as poor scanner image quality, frequent errors and paper jamming problems.”

A Republican poll watcher reported that officials allowed workers to use ballot machines that were missing security seals in Gwinnett County, The Star reported.

The glitch-prone software was used in all 159 of Georgia counties, the report said. Dominion classified its presence in Georgia as a “statewide voting system rollout.”

Subsequently, Raffensperger failed to disclose that the testing lab hired by Georgia to conduct an audit of Dominion Voting Systems technology used during the 2020 elections had a long-standing relationship with Dominion.

In a Dec. 3 report for The Epoch Times, Jeff Carlson notes that Pro V&V Voting System Test Laboratory “is the same one that previously certified the Dominion systems and also approved a last-minute system-wide software change just weeks before the election.”

In his Nov. 17 statement announcing the results of the audit, Raffensperger failed to disclose that Pro V&V had a preexisting relationship with Dominion that dated back years, Carlson’s report noted.

Raffensperger also failed to disclose that Dominion had used technical conclusions from Pro V&V in a pre-election Georgia lawsuit that questioned the reliability of Dominion’s systems during a last-minute software fix before the Nov. 3 election. The testing from Pro V&V had been characterized as “superficial” and “cursory testing” by an expert cited in court documents.

In the widely quoted statement, Raffensperger said that the audit of Dominion machines was complete, there was “no sign of foul play,” and that “Pro V&V found no evidence” of tampering with the machines.

Carlson noted: “Raffensperger also included an impressive description of Pro V&V in his statement, but again failed to disclose the firm’s relationship with Dominion, nor did he address the fact that Pro V&V appears to be a very small and private company that operates out of a single office suite.”

Georgia Republican Sens. David Perdue and Kelly Loeffler called for Raffensperger to resign, accusing him of failing “to deliver honest and transparent elections.”