Both Trump and Peña Nieto get the core value of the U.S.-Mexico political equation

President Enrique Peña Nieto’s invitation to the two U.S. candidates for president is one more instance of the growing role of Mexico in domestic American politics.

There was a time, now long ago politically, when Mexican politicians preferred to ignore what they considered an embarrassment of the Mexican American population in the U.S. and the massive flow of migrants from below the border.

In more recent times, Mexican politicians have seen the growing size and activism in the Mexican American population as one of their negotiating weapons in the increasingly complex relationship with the U.S. 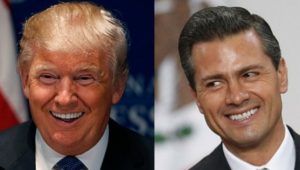 To some extent this business – the third largest foreign destination and source of American trade – is underpinned by the huge American Mexican American population. It is now estimated at 33 million or a tenth of the U. S. population, a third of whom were born in Mexico.

With its own population tripling in a half century to some 135 million by 2012, Mexico’s long-time monopoly ruling party, the Party of the Institutionalized Revolution [PRI], always had seen immigration to the U.S. as its steam escape valve. S

till a largely subsistence agriculture economy with crippling left wing ideological modifications introduced in the 1930s, Mexico could not provide jobs and livelihood for its population.

The PRI did everything it could to push migrants over the border, all the while ignoring their existence in the U.S., but welcoming their remittances to relatives who hadn’t made the journey. [Trump has said he would block the largest remittance channel in the world, more than $23 billion annually. But like so many of Trumps’ proposals, it’s not clear how he could do that and if he could, how to avoid serious consequences to both economies.].

In more recent decades, Mexico has not only begun to try to acknowledge the large Mexican presence in the U.S. but its government – including a short ill-fated opposition interregnum by the Catholic-oriented and northern states based National Action Paty [PAN] has tried to exploit it. Mexican politicians have seen the possibility of its using the growing Mexican American political influence as a weapon in bilateral national negotiations.

Peña Nieto’s invitation to the two candidates to come to Mexico to discuss bilateral issues was a daring maneuver in this new game of growing interrelations.

The invitation came despite what some would interpret as Trump’s hostile attitude toward Mexican emigration, including the illegals crossing a very leaky U.S. southern border.

Mexico’s population control policies, and the inevitable fall in birthrate with rising living standards, has somewhat reduced the pressure to push more Mexicans across the border. But even though the birthrate has been cut by two thirds in recent decades, at 1 percent in a population half of whom was under 25 in 2010, there are surplus workers even which a growing industrialization and modernized corporate agricultural sector [with exports to the U.S.] cannot absorb.

Donald Trump’s immediate acceptance of Peña Nieto’s invitation, despite what some in Mexico and the U.S. might have characterized as his antagonistic statements, was characteristic. He obviously saw it as another opportunity, whatever the outcome of his discussions with the Mexican president, as another of his successful media exploitations. And Hillary Clinton’s delayed response was equally characteristic of her inability to meet Trump’ unpredictable bursts – perhaps an omen for the what most observers believe will be the crucial candidate debates.

Trump has promised to slap restrictions on multinational companies’ exports from migrating U.S. manufacturing which moves south of the border to exploit lower wage and other operating costs. That would call for a renegotiation of the North American Free Trade Agreement [NAFTA], and perhaps negotiation of a new “Bracero” treaty – contract imported agricultural workers – to satisfy the agro-industrial lobby for unrestricted immigration.

Whatever the outcome of Trump’s talks in Mexico City – and they are likely to lead only to publicly announced generalities – he has scored points against Clinton.

And at the same time, Peña Nieto will have made his point that Mexican policies [and [politics] can no longer be ignored by American politicians.

Both Trump and Peña Nieto get the core value of the U.S.-Mexico political equation, WorldTribune.com