After its efforts to identify fake news totally backfired, Facebook said it has come up with a better way to ensure its users get what it decides are the actual facts. 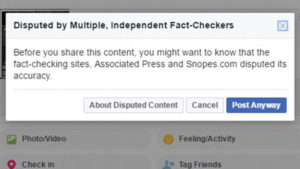 The social media giant announced it will remove the “disputed” tag it had implemented to alert readers of potential fake news stories.

Facebook said that placing the “disputed” tag on inaccurate stories may have actually reinforced “deeply held beliefs,” instead of opening up readers to critical thinking, according to a report by Gizmodo.

Instead of flagging articles with the “disputed” tag, Facebook will now populate news feeds with additional “related articles,” which, the company says “is a more effective way to help people get to the facts.”

Rather than completely removing fake stories from the site, Facebook is relying on the deprioritization of stories to make it more difficult for users to find them.

Facebook also announced that it is starting a new initiative to better understand how people decide whether the information is accurate or not based on the news sources they depend upon.