As investigators zero in on data, here are other indicators election results were way off

Going into the Nov. 3 election, President Donald Trump had a 52 percent approval rating and 56 percent of voters said they were better off than four years ago.

Trump enjoyed a 30 percent voter enthusiasm edge over Democrat Joe Biden. On Election Day, Trump received 10 million more votes than he had in 2016. 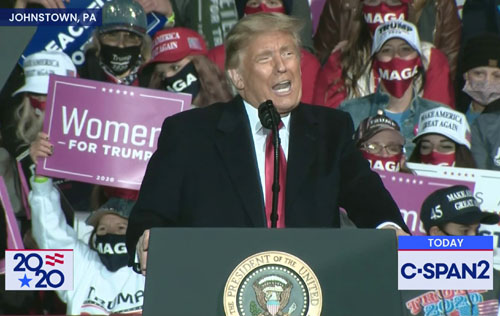 “With those numbers in mind, wouldn’t you feel pretty confident that the sitting president had, indeed, been re-elected? Alternatively, wouldn’t you consider it an amazing feat if, instead, the president’s challenger was victorious? The improbability of that result should be newsworthy all on its own,” J.B. Shurk noted in a Nov. 13 analysis for The Federalist.

Still, the major media and disgraced pollsters guaranteed a Biden landslide, not a close race in which Democrats lost in almost every other avenue of government.

To put this in perspective, President Barack Obama lost 5 million votes between his 2008 and 2012 elections. He is the only president to have lost voters and still won re-election.

By comparison, Trump not only added about 10 million votes to his 2016 haul but also shattered the record for most votes received by a sitting president. Trump won a greater share of minority votes than any Republican presidential candidate since 1960 and brought more Democrats over to his side than in 2016. More than nine in 10 evangelical Christians voted to re-elect the president.

56 Percent of Americans Better Off Than in 2016

According to Gallup, only 32 percent of Americans say they aren’t better off since Trump was inaugurated. No sitting president has lost re-election when more than half of the country is doing better than before the incumbent entered office.

In fact, Obama, George W. Bush, and Ronald Reagan all won re-election, even though only about 45 percent of the country felt better off than when their presidencies had begun.

Trump policies brought minority unemployment to record lows, and minority wealth savings had reached record highs. At the same time, the stock market had risen to all-time record highs. In other words, the Trump economy was benefiting Americans at all economic levels.

After the pandemic caused an election-year recession, the economy has steadily rebounded since summer. Unemployment has already dropped back below 7 percent, much faster than many economists thought possible, and the stock market is back to its pre-pandemic highs.

In June, during the middle of the pandemic, pollster Scott Rasmussen was blown away by the enthusiasm gap between Trump and Biden voters. He wrote in amazement: “Wow! 76 percent of Trump voters are enthusiastic about their candidate compared to just 49 percent of Biden voters.”

This enthusiasm gap, measured consistently as somewhere between 15 and 30 percent, was picked up by many pollsters. Richard Baris, the director of Big Data Poll, told the New York Post in mid-October that enthusiasm for Trump “is historically high,” while “Biden’s enthusiasm level is historically low.”

Anyone who saw a Trump rally would not be surprised. At one of his last campaign stops before Election Day, about 60,000 Trump supporters showed up to see the president in Butler, Pennsylvania. Trump tractor parades, boat parades, and 30-mile-long highway caravans have been a common feature of the 2020 campaign.

Just as in 2016, polling this election cycle proved decisively wrong. Republicans in the House, Senate, and state legislatures across the country all out-performed polling estimates. Pollsters consistently predicted a Biden blowout, but instead, the race is one of the closest in American history.

Pollsters have partially excused their efforts by pointing to a “shy Trump voter” error in the polls that failed to capture the president’s true support. To get around this problem, some pollsters asked respondents to name the candidate for whom they believed their neighbors would likely vote, hoping to elicit more candid voting intentions.

By a 7 percentage-point margin, Harvard/Harris polling found in late September that more Americans believed their neighbors would vote for Trump’s re-election than for Biden. In the week before the election, USC Dornsife published a poll asking a similar question: “Do you think your friends and neighbors are voting for Trump?” USC concluded that “it’s looking like an Electoral College loss for Biden.”

On the day before the election, Rasmussen had Trump at 52 percent approval. At the same point in his presidency, and before his own re-election, Obama had 50 percent. As of Nov. 11, Rasmussen shows 53 percent of the country approves of Trump, compared to 46 percent who disapprove. No incumbent president has ever lost re-election with numbers such as these.

2020 election, As investigators zero in on data, here are other indicators election results were way off, President Donald Trump, WorldTribune.com