Republicans, conservatives, Trump patriots must stand up and hold him and his regime politically and legally accountable before it’s too late.

The crisis on our southern border is spiraling out of control. In February alone, over 100,000 illegal migrants were apprehended by the border patrol. The Department of Homeland Security says there are at least 30,000 unaccompanied minors that have entered the United States. DHS acknowledges that, if present trends continue, over 1 million illegals will flood our country by the summer — most of them from Central America and Mexico. 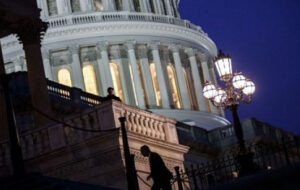 Moreover, many of the unaccompanied minors are being sheltered in temporary facilities, which are overwhelmed in the face of this massive border surge. Children are sleeping on floors; some are going hungry; and many are being held in unsanitary cages. It is the worst border crisis in 20 years.

Yet, even more disturbing, the Biden administration refuses to perform Covid-19 tests on the illegal aliens flooding our porous southern border. Local border towns, state governments and hospitals have had to deal with the dangerous, reckless consequences of Biden’s policies. Many of these illegal migrants and unaccompanied minors are being released into the United States — whether they have the coronavirus or not. Texas Gov. Greg Abbott has confirmed that at least 6 percent of the migrants are testing positive for Covid-19 (never mind other diseases, such as chickenpox and the measles).

The Biden administration’s response: Transport thousands of these illegal migrants and minors in the dead of night into towns and neighborhoods across the southwest, especially in Texas and Arizona. Biden officials are deliberately placing migrants infected with the coronavirus on Greyhound buses to be sent to their destinations of choice. American passengers and bus drivers have been exposed to these infected and highly contagious illegals.

The situation has become so perilous, Greyhound’s CEO wrote an open letter to the Biden administration saying the bus company refuses to take any more migrants unless they can show proof that they have tested negative for Covid-19. The reason: Numerous drivers and U.S. passengers have contracted the deadly virus, and some are fighting for their very lives. A caller on my show revealed last week that a relative of his, a Greyhound bus driver, who was tasked with transporting illegal migrants, some of whom were infected with the coronavirus, has now come down with Covid-19. He is on a ventilator, struggling to survive. If he dies (and I pray he doesn’t), Biden will have blood on his hands.

The border crisis is solely of Biden’s making; he owns it. During the first days of his presidency, Biden issued several executive orders reversing former President Trump’s policies. Biden halted construction on the border wall. He ended the third-country asylum agreements and Trump’s “Stay in Mexico” program, which kept most asylum seekers outside of the United States pending the resolution of their immigration cases.

Most importantly, Biden opened up our southern border to unaccompanied minors and illegal immigrants, promising that if they reach American soil they will receive an eventual amnesty. He has unleashed the floodgates. It took Trump three years to secure the U.S.-Mexican border — one of the great accomplishments of his presidency. It has taken Biden 50 days to smash it. And it has been done deliberately.

Biden is an open borders-free trade globalist. His goal (along with the radical Democrats) is to destroy the American nation — its language, culture, sovereignty and national identity. The objective is obvious: import enough cheap labor and a massive bloc of government-dependent future voters to eventually replace and wipe out America’s middle- and working-class. How many Americans get killed, laid off or dispossessed is irrelevant to Biden and his corporate masters.

New York Gov. Andrew Cuomo is (rightly) under siege for his handling of the nursing home deaths and numerous accusations of sexual harassment. Yet, it begs the question: Why Cuomo and not Biden as well? On being a sexual predator, Cuomo has nothing on Biden. He digitally raped Tara Reade (I completely believe her), and while vice president under Barack Obama repeatedly harassed, accosted and inappropriately touched dozens of women.

Cuomo deliberately sent infected Covid-19 patients into nursing homes, causing the unnecessary deaths of thousands of elderly residents and vulnerable senior citizens. For this crime, there is talk of impeaching him. How are Biden’s actions any different? He is deliberately allowing coronavirus infected migrants to invade our country, our neighborhoods and our communities. Because of his recklessness, Americans have already died — and many more will continue to die.

No other country opens its borders in the midst of a pandemic; Biden’s America is the only one. He has betrayed the very citizens he is obligated to protect. There’s a word for that. It’s called treason.