Southwest Airlines continues to suffer widespread disruption of its operations and other airline may be next following reports of pilots and other employees joining a “mass sickout” in protest of Joe Biden’s vaccine mandate for all companies with more than 100 employees that do business with the U.S. government.

“Southwest Airlines is suffering an operational meltdown this weekend as hundreds upon hundreds of flights have been delayed or canceled outright,” the Points Guy reported. “The airline is blaming weather and an air traffic control issue from Friday for the domino effect of cancellations.” 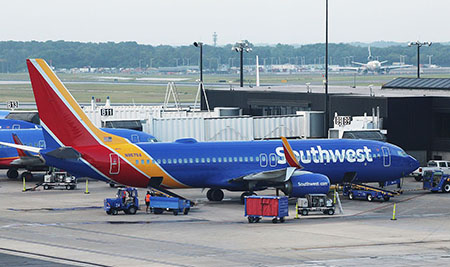 More than 2,000 flights were canceled over the weekend. The cancellations mostly affected travelers in and out of Florida.

Some on social media reported that American Airlines may be next.

A Message from an American Airline Pilot ~

Washington Times columnist Cheryl K. Chumley noted that, if the pilots indeed had refused to fly due to the vaccine mandates, they “are patriots who deserve Americans’ full support.”

“And think about this: Truly — hopefully — this is indeed just the beginning,” Chumley wrote.

Biden instituted vaccine mandates for all companies in the U.S. that have more than 100 employees. Many airlines have complied.

United Airlines instituted their mandate shortly after Biden’s August announcement. American Airlines also made plans to enforce the Biden’s unilateral requirement, which has not been made law or approved by Congress.

More than 350 Southwest flights were canceled on Monday and over 600 were delayed.

“Thousands of passengers have been stranded at airports, been forced to wait in long lines, or spent hours on hold trying to re-book their flights,” The Point Guy report noted.

One traveler told The Point Gusy that she and her daughter’s flight from Orlando to Las Vegas was canceled Saturday. “She was told they wouldn’t be re-booked until Tuesday, wouldn’t get hotel rooms and couldn’t get cash refunds. She said “I couldn’t just sit there so I luckily was able to re-book on Spirit airlines and get here (Las Vegas); however, my luggage will not make it and I have no idea where it is. We are here but without any clothes, toiletries and no care from Southwest.’ ”

Dallas-based Southwest Airlines is mandating that its employees be fully vaccinated by Dec. 8. Employees can seek approval to skip the shots due to medical or religious reasons, KDVR reported.

Biden’s vaccine mandate “is the fork in the road for America: Go left, and it’s the path to communism and collectivism and total top-down bureaucratic control. Go right, and the authoritarian leftists go back in their box, are shoved back in their corners, are pushed back in their proper subservient-to-the-people places,” Chumley wrote.