Colorado’s population increased by less than 200,000 since 2016 yet its active voters increased by half a million (and Biden won nearly all of these votes). 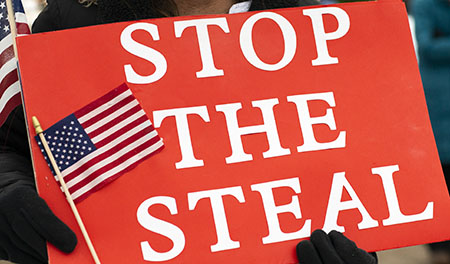 In California, 3,000 votes were recorded from an empty dorm building.

These are just three of a multitude of instances of fraud and irregularities on Nov. 3, 2020 as reported by an independent media outlet, Gateway Pundit, that has been at the forefront of such reports.

“We’ve received numerous emails from individuals around the country who say that their state did not go blue. Americans in Wisconsin, Michigan, Pennsylvania, Arizona, Georgia, Nevada, Virginia, Colorado, Minnesota, Rhode Island, California and more, all say their states were not blue,” Gateway Pundit’s Joe Hoft noted on June 5.

In 2016, Hillary Clinton won Virginia by 212,000 votes and never got close to an 80/20 ratio in Fairfax. As Gateway Pundit noted, “in this one late night 80/20 vote dump in Fairfax, Biden picked up a margin of 230,000 votes, more than Hillary’s statewide margin in 2016. And in 2016, there was both a libertarian and a never-Trumper (Evan McMillan) that both pulled votes from Trump. Why is no one from Virginia screaming to high heaven demanding the ballots in this county be forensically reviewed?”

In Colorado, Hillary Clinton received 1.3 million votes in 2016. In 2020, Trump had more votes than that in the state. But Biden somehow had 1.8 million to reportedly win the state.

“Biden had half a million more votes than Hillary at 1.8 million which makes no sense when you acknowledge the poor results, poor attendance, and lifeless rallies of the Biden campaign,” Gateway Pundit noted.

Trump improved his vote in the state by approximately 162,000 votes. Biden reportedly improved on Hillary’s haul by 465,352 votes.

Gateway Pundit noted: “Somehow with an increase in voters and population of less than 200,000 since 2016, Joe Biden attracted 460,000 more (38%) votes than Obama or Hillary did in the prior elections. Biden received 440,000 more votes than President Trump who surpassed his, Hillary’s and Obama’s record totals from the past. This guy who couldn’t make it out of the basement and who we can’t recall ever drawing circles in Colorado won. He was not that popular. This absolutely does not add up.”

In California, the Santa Barbara News-Press reported last week that approximately 3,000 mail-in ballots counted in the Nov. 3 election were supposedly cast by UC Santa Barbara students residing in a voting precinct that, along with other dorm buildings, includes the Francisco Torres/Santa Catalina Residence Hall.

The problem: Due to Covid-19, the building which normally accommodates 1,300 students was empty and locked down through most of 2020.

This means no students/voters were residing inside the Torres Building (nor any of the other dorms) during the election season.

The second problem: The ballots could not legally have been forwarded to students where they were actually living. Why not? Because forwarding ballots to alternative addresses is a felony.

An individual filed a criminal complaint alleging Fraud Corruption of the Voting Process. According to the report, the complaint fell into an investigative “black hole,” with several agencies directing the individual to other agencies with no progress being made.

“We all know there is no longer a Justice Department and an FBI which adhere to justice. They cannot be trusted. The effort to save America starts with you.”