How does it feel to be ratioed even when the system is rigged in your favor? 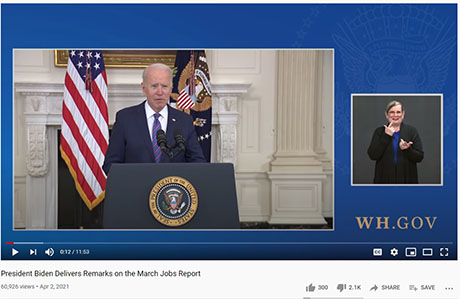 The propagandists at YouTube have removed millions of “dislikes” from Biden’s White House videos, a report said.

The 81m.org website, which has tracked engagement on the White House YouTube channel since January 26, reported that some 2.5 million of the 3.7 million dislikes have been removed from the channel’s 300 Biden videos.

On average, YouTube has been removing about 8,000 dislikes on each video. No likes have been removed, the report said.

Since Biden assumed office, White House videos have been getting thousands of dislikes shortly after their posting. Even with YouTube’s intervention, on average, each video has about six times more dislikes than likes. Without intervention the ratio would be over 17 dislikes for every like.

The website 81m.org lists results of the same analysis for several other YouTube channels with large followings. None of them exhibited dislike removals of this magnitude.

For example, videos of PewDiePie, one of the most popular channels on the platform, do show some like and dislike removals, but never more than a few dozen per video, based on a review of the data for the past more than two dozen videos on the channel.

“YouTube and its owner, Google, have long faced accusations of political bias,” The Epoch Times noted. “The companies have said their products are developed and run as politically neutral, but employee accounts and leaked internal materials indicate the companies are infusing their politics into their products.”

According to research psychologist Robert Epstein, Google shifted millions of votes in the Nov. 3 election by skewing its search results and other tools, compared to competitors.

“Google search results were strongly biased in favor of liberals and Democrats. This was not true on Bing or Yahoo,” Epstein told Fox News’ Tucker Carlson, referring to data from more than 700 voters who worked with him to monitor what results they were receiving from channels such as search results, reminders, search suggestions, and newsfeeds ahead of the election.