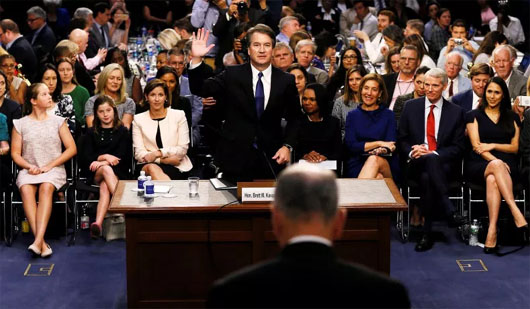 Journalists and sources for ABC, The Washington Post, PBS and others “are targeting sites like Facebook’s members only Holton-Arms alumnae for women who might have met Kavanaugh while in high school, suggesting strongly and without evidence that many others were abused,” Paul Bedard wrote for the Washington Examiner on Sept. 19.

“Liberal media outlets are using Facebook and other social outlets as a dragnet” for potential new accusers, Bedard wrote.

“Hi ladies, I’m Holton class of 1991 and an investigative producer/reporter for ABC National News. I would really appreciate any leads on Kavanaugh,” posted Lauren Pearle. She added, “Hopefully, the truth will emerge.”

In another Facebook post, Holton-Arms alum Maggie Quiroga Mainor wrote, “If you have any connections from back in 1978 to 1982, please contact ASAP. I’m in touch w(i)th WaPo and other papers who want to support Dr. Ford.”

A third Holton-Arms alum, Sabah Fatima, wrote on Facebook, “Hi! I’m looking for Cristina King Miranda. My very dear friend from childhood, Amna Nawaz, is at PBS newshour and would love to talk to her.”

On her Facebook page, Nawaz posted an unsigned note from a former pal of Ford who said the alleged incident “was spoken about for days afterwards in school.”

That memo on behalf of lawyer Debra Katz said, “Probably more so than Ms. Blasey Ford, many of us knew and hung out with Brett, Mark Judge, and their friends, we went to the same parties, to beach week, etc. It sounds like we likely had many more interactions with him than Ms. Blasey Ford. I have never met her, but the story that she is telling sounds plausible to me, and I believe her. Assuming that she is telling the truth, the odds are good that there may be other women who had a similar experience, and I am reaching out to you to help find out if this is the case.”

Meanwhile, Holton-Arms alum Miranda told NPR that she does not know if the alleged sexual assault by Kavanaugh took place as she had first suggested on social media.

“That it happened or not, I have no idea,” Miranda told NPR’s Nina Totenberg. “I can’t say that it did or didn’t.”

Miranda had previously written in a now-deleted Facebook post that, “The incident DID happen, many of us heard about it in school.”

Miranda told NPR: “In my [Facebook] post, I was empowered and I was sure it probably did [happen]. I had no idea that I would now have to go to the specifics and defend it before 50 cable channels and have my face spread all over MSNBC news and Twitter.”

Miranda tweeted on Sept. 19: “To all media, I will not be doing anymore interviews. No more circus. To clarify my post: I do not have first hand knowledge of the incident that Dr. Christine Blasey Ford mentions, and I stand by my support for Christine. That’s it. I don’t have more to say on the subject.”