‘Who got to Bill Barr?’; Giuliani says election fraud coordinated by ‘somebody in Washington’

“Each one of [the election irregularities] has in one degree or another almost the same pattern of activity,” Giuliani explained. “This was a pattern that was set by somebody in Washington because everybody else carried it out exactly in the same way. And they did it in the crooked cities. They didn’t do it everywhere.” 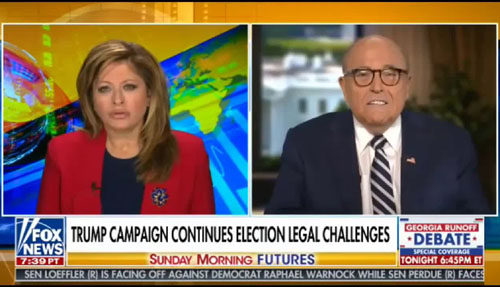 Baritromo asked: “So you think somebody in Washington directed this. Who did this? That would suggest this is organized, developed. Who is in charge, who directed this?”

“I have no idea,” Giuliani said. “I mean, I don’t know who was in charge of it. All I can tell you is it looks like a very well planned, very well executed situation.”

Also on Sunday, Bartiromo interviewed Director of National Intelligence John Ratcliffe, asking him: “Who got to Bill Barr?”. Ratcliffe deflected the question.

Bartiromo asked: “Speaking of threats and bullying, who got to Bill Barr? I’ve got to ask you your thoughts on where we are here with AG Bill Barr and John Durham. It seems like it’s an about-face, we were expecting a real investigation into what took place and why Crossfire Hurricane — the investigation into Donald Trump — still has no accountability. Can you give us some sunlight on that?”

Ratcliffe did not respond to the Barr question in particular, telling Bartiromo he thought there would be an interim report from Durham before the election and he still thinks “there should have been.”

Barr was reported on Thursday to have blocked a White House official from entering the DOJ building. Heidi Stirrup was barred from the building after she attempted to ask staffers to share information about election fraud, according to news reports cited by London’s Independent.

Extraordinary times call for extraordinary measures and leaders. Unfortunately, the Attorney General Bill Barr has proven himself to be anything other than extraordinary.

This week, Barr commented that he has not seen fraud on a scale that could have affected a different outcome in the election. Really? It’s curious, Barr, the head of the DOJ, would affirmatively make a statement regarding a pending investigation.

As a former prosecutor for over three decades, I, and virtually everyone similarly situated know that DOJ guidelines do not allow comments on investigations. They neither confirm nor deny the existence of any investigation. Yet, Barr actually goes beyond that and takes it upon himself in the midst of a presidential election before some states have certified as affidavits alleging fraud continue to come in before electors have even voted — that there is not sufficient evidence.

You know, Bill, Americans are furious over the Russia collusion hoax, especially the 10 million more Americans who voted for Trump this election. We need answers. We need action. We need justice. And you, Mr. Barr, are so deep in the swamp, you can’t see beyond your fellow reptiles.

In a video posted to Parler, Roger Stone said he was not surprised that Barr has “suddenly determined” there is no voter fraud. “Bill Barr’s job is to block for the deep state,” Stone said.

Meanwhile, Trump on Sunday tweeted that Giuliani had tested positive for the coronavirus.

“@RudyGiuliani, by far the greatest mayor in the history of NYC, and who has been working tirelessly exposing the most corrupt election (by far!) in the history of the USA, has tested positive for the China Virus,” Trump tweeted. “Get better soon Rudy, we will carry on!!!”

Giuliani later Sunday tweeted he was getting good care and recovering quickly.

“Thank you to all my friends and followers for all the prayers and kind wishes,” Giuliani wrote on Twitter. “I’m getting great care and feeling good. Recovering quickly and keeping up with everything.”

‘Who got to Bill Barr?’; Giuliani says election fraud coordinated by ‘somebody in Washington’, 2020 election, DOJ, fraud, WorldTribune.com