What took her so long? Ocasio-Cortez gets behind The Purge

“We’re going to have to figure out how we rein in our media environment so that you can’t just spew disinformation and misinformation.” 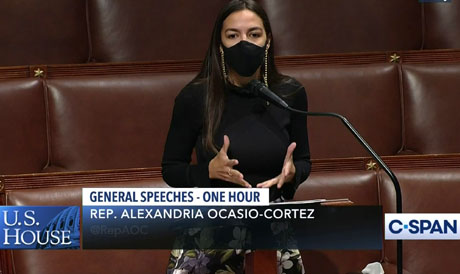 With that comment on Jan. 12, New York Democrat Rep. Alexandria Ocasio-Cortez got behind The Purge.

The question is, what took her so long? Purges and socialists go together like chocolate and peanut butter.

During the Instagram Live video, the leftist member of Congress appeared to read a question that a commenter had posed about whether there is “Any discussion in Congress about federal truth and reconciliation or media literacy initiatives to help with healing.”

In her response, Ocasio-Cortez said: “There’s absolutely a commission that’s being discussed, but it seems to be more investigatory in style rather than truth and reconciliation, and so I think that’s an interesting concept for us to explore. And you know I do think that several members of Congress in some of my discussions have brought up media literacy because that is a part of what happened here. And we’re going to have to figure out how we rein in our media environment so that you can’t just spew disinformation and misinformation. It’s one thing to have differing opinions but it’s another thing entirely to just say things that are false. And so that’s something that we’re looking into.”

Ocasio-Cortez also said that President Donald Trump “assisted by members of Congress, incited an attack on the United States Capitol.” She described the president as “a traitor to our country.”

Following the breach of the U.S. Capitol on Jan. 6, Ocasio-Cortez said: “I had a pretty traumatizing event happen to me, and I do not know if I can even disclose the full details of that event, due to security concerns, but I can tell you that I had a very close encounter where I thought I was going to die. I did not know if I was going to make it to the end of that day alive — and not just in a general sense, but also in a very, very specific sense.”

She also accused some inside the Capitol of conspiring with those who broke in.

“There were those acts of heroism, but next to that there was also acts of betrayal,” Ocasio-Cortez said. “And to run in the Capitol, in our nation’s Capitol, and not know if an officer is there to help you or to harm you is also quite traumatizing.”

New Jersey Democrat Rep. Mikie Sherrill claimed she witnessed lawmakers giving what she said were “reconnaissance” tours of the Capitol building on Jan. 5. She didn’t share any evidence to support that claim.