In running with a hoax story about Donald Trump, Russia and “golden showers,” CNN and BuzzFeed violated “every code of ethics in the world of journalism,” a media critic said. But they accomplished their goal of attacking the president-elect with a piece of “fake news” likely to dominate the news cycle right up until the inauguration.

“CNN and BuzzFeed know exactly what they are doing,” columnist John Nolte wrote for The Daily Wire on Jan. 10. 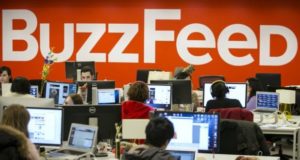 “Now that the sleazy rumors are out, they are out. Now all of the media will feel they simply must talk about them.”

Watergate reporter Carl Bernstein told CNN that a dossier “came from a former British MI6 agent who was hired from a political opposition research firm in Washington who was doing work about Donald Trump for both Republican and Democratic candidates opposed to Trump.

On Jan. 10, BuzzFeed posted an “unverified” story under the byline of Ken Bensinger, Mark Schoofs and Miriam Elder titled “these reports Allege Trump Has Deep Ties To Russia” and posted a link to a series of memos and documents alleging, among other things, that Russia has been cultivating Trump for more than five years and that Trump has been in constant contact with the Kremlin for information on his opponents.

The memos, first disclosed by CNN, were written by a former high-ranking British intelligence official hired by Republicans last year to collect information on Trump.

Also contained in the documents, which BuzzFeed did not verify, were alleged instances of blackmail and sexual misconduct. One claim that set the web ablaze is that Trump rented the presidential suite of the Ritz Carlton Hotel in Moscow, where he knew that the Obamas had slept in; he then hired a number of prostitutes to perform a “golden shower” (pissplay) on the bed and in the room.

Noted #nevertrump voice Rick Wilson later commented on Twitter, stating that the report “gave a new meaning to Wikileaks” and that the report was the reason “everybody was fighting so hard against the election of Trump.”

Not only did CNN and BuzzFeed run with the hoax, but Sen. John McCain took the documents to FBI Director James Comey in December. The information was then included in a classified report U.S. intelligence officials delivered to President Barack Obama and Trump last week.

“Welcome to the New Normal, where the [GOP] head of the Senate Armed Services Committee personally delivers memos to the FBI director, alleging the president-elect’s team has been in contact with Russian intelligence, which has compromising personal and financial material,” Foreign Policy wrote on Jan. 10. “That was the bombshell dropped by Buzzfeed, which published the documents, calling them ‘unverified, and potentially unverifiable.’ ”

The first elements of the story were published in October by Mother Jones’ David Corn, but as The Guardian’s Julian Borger points out, Trump’s staffers have been an object of interest for the U.S. intel agencies for months. On Jan. 11, Moscow denied having any compromising information on Trump.

As Zero Hedge reported on Jan. 10, it turns out the entire story is not only fake, but “was a prank perpetuated by 4chan on Rick Wilson.”

A post on 4chan on Oct. 26 stated “mfw managed to convince CTR and certain (journalists) on Twitter there’ll be an October surprise on Trump this Friday”.

A Nov. 1 post said: “So they took what I told Rick Wilson and added a Russian spy angle to it. They still believe it. Guys, they’re truly f—ing desperate – there’s no remaining Trump scandal that’s credible.”

“Despite the fact that these documents are unsubstantiated, despite the fact that – and this is important – the rabidly anti-Trump media has had almost a year to substantiate them and could not, by pretending it had a legitimate news story about the documents, CNN laid the groundwork for BuzzFeed’s Ben Smith to violate every code of ethics in the world of journalism,” Nolte wrote.

“Trust me, CNN and BuzzFeed’s timing was no accident. CNN claims that Trump and Obama being briefed on the matter made it legitimate news. But anyone who tells you the timing and leak of that briefing was an accident or uncoordinated, is a total fool or a shameless liar.”