Unfreedom of the Press: Levin book number one for 4th week

Radio and TV host Mark Levin’s book, Unfreedom of the Press, which details the corporate media’s leftist bias and its animus toward President Donald Trump, is at the top spot on the New York Times bestseller list for a fourth consecutive week. 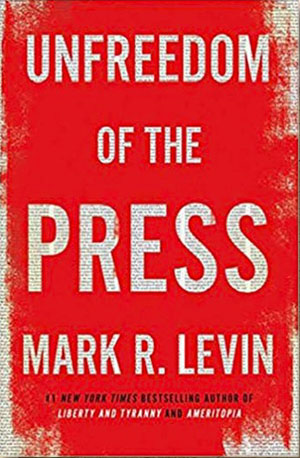 Unfreedom of the Press has sold some 300,000 copies over all forms, hardcover, ebook, and eaudio.

“Breaking News, as they say! For the 4th week in a row UNFREEDOM OF THE PRESS is #1 on the New York Times bestseller list for nonfiction hardcover books and ebooks! Thank you Levinites!” Levin tweeted.

“The public is furious with the left’s hijacking the media and want some answers. I think my book provides those answers,” Levin told Washington Examiner columnist Paul Bedard.

In Unfreedom of the Press, Levin writes: “If newsrooms and journalists do not act forthwith and with urgency to ‘fundamentally transform’ their approach to journalism, which, sadly, is highly unlikely, their credibility will continue to erode and may well reach a point soon where it is irreparably damaged with a large portion of the citizenry, and rightly so.

“The media will not only marginalize themselves but they will continue to be the greatest threat to freedom of the press today — not President Trump or his administration, but the current practitioners of what used to be journalism.”

Bedard noted that Levin “still has a way to go to top his blockbuster book Liberty and Tyranny that had the top spot for three months.”

Levin, host of the “Mark Levin Show” on radio, “Levin TV” on Blaze TV and “Life, Liberty and Levin” on Fox News, has written eight books, all New York Times bestsellers and the last six in a row ranking No. 1.