Amid the coronavirus outbreak, food delivery apps are seeing record downloads as state and local governments throughout the United States are restricting in-person dining at restaurants. 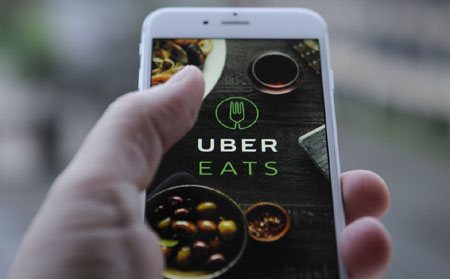 In a gesture it said was meant to help local restaurants during the health crisis, delivery company Uber Eats has waived delivery fees for certain restaurants.

“As more people stay home, local restaurants need your business more than ever. That’s why we’re waiving the Delivery Fee for all orders from every independent restaurant on Uber Eats,” the company said in a statement. “Delivery Fees will be automatically waived on all applicable orders, which we hope will make eating from your local favorites even easier.”

The change applies to more than 100,000 eateries, which can be ordered from online or by using the app, which is available on both iPhone and Android devices.

Governors in New York, New Jersey, Connecticut, and Maryland announced on Monday that restaurants and bars in those states would be limited to takeout and delivery only. New Jersey Gov. Phil Murphy recommended a statewide curfew and encouraged residents to stay indoors from 8 p.m. until 5 a.m.

Ohio and Illinois barred in-person dining on Sunday and California closed bars across the state.

Several grocery delivery services, including Instacart and others, have also promoted a “contactless” delivery option, in which grocery orders can be left at the door. That has helped contribute to a huge boost in sales. On Thursday, Instacart said its sales growth rates for the week was 10 times higher than the week before, and had increased by as much as 20 times in areas like California, New York, Washington and Oregon.

“With government mandates to practice ‘social distancing,’ U.S. consumers have been stocking up for long weeks to be spent at home. Stores were cleared of key supplies, like toilet paper, and several also saw long lines and crowds as panic-buying set in,” Sarah Perez wrote for Tech Crunch on March 16. “Grocery delivery and pickup, meanwhile, presents an easier option — as well as one where you could limit your exposure to other people. With grocery pickup, consumers only have to interact with a single store employee from their curbside parking space. And with grocery delivery, most orders can simply be left on the doorstep with no person-to-person contact required.”

As the COVID-19 pandemic spreads across the U.S., grocery delivery apps have begun seeing record numbers of daily downloads, according to new data from app store intelligence firm Apptopia. On Sunday, online grocery apps, including Instacart, Walmart Grocery and Shipt, hit a new record for daily downloads for their respective apps.

Typically, these apps (except for Shipt) see tens of thousands to as many as 20,000+ downloads per day. But on Sunday, Instacart saw more than 38,500 downloads and Walmart Grocery saw nearly 54,000 downloads, Apptopia said. Shipt, though hitting record numbers, saw only 7,285 downloads on Sunday. To some extent, its lower figures could be due to Target’s move to integrate Shipt’s grocery delivery service, which it owns, into its main app.