In the 1964 book “Understanding Media: The Extensions of Man”, author Marshall McLuhan coined the phrase “the medium is the message.”

In 1964, there was the New York Times. But there was no Washington Times, Fox News or WorldTribune.com. In 2019 there is something called Twitter, much to the chagrin of  that paper that once served as the daily Bible for the major networks. 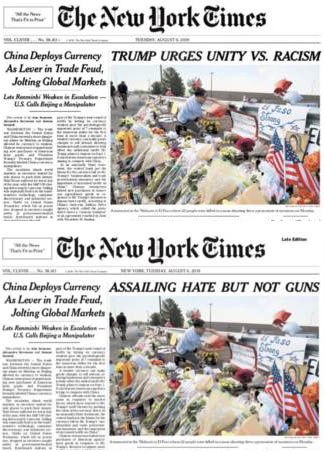 The front page of the Aug. 6 New York Times led with the headline “Trump urges unity vs. racism”.

Poor choice of words in the minds of social media warrior from the Left who may have felt the headline was too fair to the president in the aftermath of the mass shootings in El Paso and Dayton last weekend.

The once-proud Times bowed, and the headline was quickly changed to “Assailing hate but not guns”.

The headline ran in the Times’ first print edition and was changed in subsequent editions.

AOC had gone on record of accusing the Times of abetting “white supremacy.”

Soon after word spread of the “too-fair-to-Trump” headline, the hashtag #CancelNYT was trending on Twitter as enraged Trump-haters threatened to either cancel their New York Times subscriptions or claimed that they already had.

Ocasio-Cortez, who many Democrats would like to see in the 2020 presidential race (she’s not chronologically old enough), tweeted: “Let this front page serve as a reminder of how white supremacy is aided by – and often relies upon – the cowardice of mainstream institutions.”

De Blasio, who is said to be running for the 2020 Democratic presidential nomination (polls show him with zero percent support), tweeted: “Hey, @nytimes — what happened to “The Truth Is Worth It?” Not the truth. Not worth it.”

Booker, the New Jersey senator who in the latest 2020 presidential poll stood at just 1 percent support, tweeted: “Lives literally depend on you doing better, NYT. Please do.”

O’Rourke, who has stumbled and bumbled from the upper to lower tier of 2020 presidential candidates, tweeted: “Unbelievable.”

O’Rourke was responding to a tweet from pollster Nate Silver which said: “Tomorrow’s NYT print edition. No sure “TRUMP URGES UNITY VS. RACISM” is how I would have framed the story.”

In what some observers said was a pot-calling-the-kettle-black moment, CNN’s Joan Walsh was one of those who claimed to have canceled her NY Times subscription due to the original headline.

Walsh tweeted: “I canceled my subscription. I know a lot of folks will tell me I’m wrong. I will miss it. But I can’t keep rewarding such awful news judgment. “Trump Urges Unity Against Racism” is almost as bad as their full-page Comey letter coverage just before 2016 election. Nobody learns.”

A spokesperson for the Times told the Washington Post that “The headline was bad and has been changed for the second edition.”

1) The left is totally fine with threatening and attacking the media … if those attacks come from the left.

2) The New York Times is not an independent news organization with principles and integrity. Rather, its business model is comfort food for leftists, a business model it’s not willing to risk under any circumstance.

Meanwhile, President Donald Trump fired off a series of tweets following a former Google engineer’s revelation that the tech giant intends to derail his re-election.

Trump tweeted: “@sundarpichai of Google was in the Oval Office working very hard to explain how much he liked me, what a great job the Administration is doing, that Google was not involved with China’s military, that they didn’t help Crooked Hillary over me in the 2016 Election, and that they…

….are NOT planning to illegally subvert the 2020 Election despite all that has been said to the contrary. It all sounded good until I watched Kevin Cernekee, a Google engineer, say terrible things about what they did in 2016 and that they want to “Make sure that Trump loses…