President-elect Donald Trump just saved 1,000 American jobs – and he hasn’t even been sworn in yet.

And they aren’t very happy about it over at The New York Times, Rush Limbaugh noted Nov. 30. 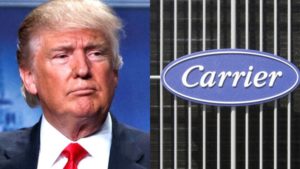 “So what was your reaction when you heard that Carrier was going to keep a thousand jobs in the United States after talking to Trump? … I mean, you’re standing up and cheering, right?” Limbaugh said. “Somebody campaigned on something that nobody else has ever even tried to do and pulls it off even before he is inaugurated.”

In an article titled “Trump to Announce Carrier Plant Will Keep Jobs in U.S.” a “seething and very unhappy New York Times” wrote that ‘from the earliest days of his campaign, Donald J. Trump made keeping manufacturing jobs in the United States his signature economic issue, and the decision by Carrier, the big air-conditioner company, to move over 2,000 of them from Indiana to Mexico was a tailor-made talking point for him on the stump.’

Limbaugh chimed in: “See? He didn’t mean it! It was just a talking point. Trump was lying. Trump had no intention of trying to save these jobs. Trump was just making fools of the rubes that were supporting him.”

The Times article continued: “Mr. Trump will be hard-pressed to alter the economic forces that have hammered the Rust Belt for decades, but forcing Carrier and its parent company, United Technologies, to reverse course is a powerful tactical strike that will hearten his followers even before he takes office.”

Limbaugh responded: “So see how the New York Times is looking at this? Remember, now, who these people are. These are leftists. These are doom-and-gloomers. America’s best days are behind us, and we just are wrapping up eight years of the best, the most competent, the most brilliant president ever – and if he wasn’t able to fix anything, nobody can fix it.

“This is the mind-set. And at the New York Times, at CNN, at the LA Times, at NBC (doesn’t matter where), Obama’s great, and if Obama couldn’t fix it, it can’t be fixed because America’s in the midst of a massive transformation which includes a decline …

“So, to them, the Carrier deal – which saves a thousand jobs – is nothing more than a tactical strike that will increase the loyalty Trump supporters have for him, but it isn’t gonna really mean anything, see?  And this is how the left looks at the things … They don’t really seek to accomplish things, but they want people to think they have. So they report things or characterize things.

“This is arrogant ignorance. ‘Mr. Trump will be hard-pressed to alter the economic forces that have hammered the Rust Belt for decades…’ Well, they can be fixed. The reason that they’re broken is because we’ve had too much government run by people that don’t know what goes on in the Rust Belt.”

The Times’ media alliance is “gonna get even more out of control as Trump succeeds,” Limbaugh said. “He’s putting great people in these positions, folks. He’s putting people that know how to fix what’s wrong…

“But even with all of this evidence right in front of them, they’re going to continue to misjudge and misunderstand who Trump is. They’re gonna cover him – the media’s gonna cover him – in the standard, ordinary way they cover all politicians. They’re gonna announce him a success or failure within those parameters, and he’s not even gonna be there. They’re gonna continually misreport, misjudge. He owns the media now anyway. Donald Trump is the media with his tweets. The New York Times and the rest of the Drive-By Media may not know it yet that they are irrelevant.”