Trump on request to Saudi king for more oil to offset Iran, Venezuela: ‘He agreed!’

U.S. President Donald Trump said on June 30 that Saudi King Salman has agreed to Trump’s request to increase oil production “maybe up to 2,000,000 barrels” to offset production cuts from Iran and Venezuela. 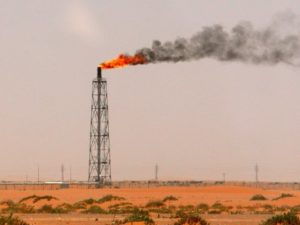 Trump tweeted on June 30: “Just spoke to King Salman of Saudi Arabia and explained to him that, because of the turmoil & dysfunction in Iran and Venezuela, I am asking that Saudi Arabia increase oil production, maybe up to 2,000,000 barrels, to make up the difference … Prices too high! He has agreed!”

The official White House position, however, was restrained.

In a June 30 statement, the White House said King Salman affirmed that Saudi Arabia has 2 million barrels a day of spare production capacity “which it will prudently use if and when necessary to ensure market balance and stability, and in coordination with its producer partners, to respond to any eventuality.”

The White House statement aligned with one by the state-run Saudi Press Agency saying that the king and Trump, in a phone call on June 30, discussed efforts by the oil-producing countries to compensate potential shortages in oil supply. The two leaders stressed the importance of maintaining oil-market stability, according to the report. The press agency didn’t say the leaders agreed and didn’t make any reference to 2 million barrels.

If the Saudis had officially agreed to Trump’s request, “that means he is calling on them to walk out from OPEC,” Iran’s OPEC governor Hossein Kazempour Ardebili said. “There is no way one country could go 2 million barrels a day above their production allocation unless they are walking out of OPEC.”

The Trump administration is pushing countries to cut all imports of Iranian oil from November when the United States re-imposes sanctions against Teheran after Trump withdrew from the 2015 nuclear deal.

China, the world’s top crude oil buyer, imported around 655,000 barrels a day on average from Iran in the first quarter of this year, according to official Chinese customs data, equivalent to more than a quarter of Iran’s total exports.

Saudi Arabia plans to pump as much as 11 million barrels of oil per day (bpd) in July, an oil industry source told Reuters, after OPEC agreed with Russia and other oil producers to raise output by about 1 million bpd.