Trump in Arizona: Who knew election was ‘corrupt’? Everyone

What happened in November 2020 was “the most corrupt, dishonest, and unfair election in the history of our country,” former President Donald Trump said on Saturday at Turning Point Action’s “Protect Our Election” rally in Phoenix. 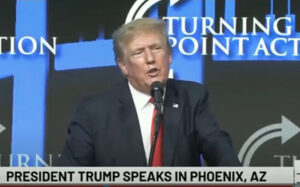 “The Democrats know it, the corrupt media, right back there, a lot of people, they know it, Big Tech knows it, and most importantly, we the American people know it.”

Focusing on the swing state of Arizona, Trump said: “There were 18,000 people who voted in Arizona in 2020 who were then purged from the rolls immediately AFTER the election. Why didn’t they purge them before Sonny [Arizona state Senator Sonny Borelli], can I ask you that question? Sonny said they cheated. They cheated. We are becoming like a third world nation, and it’s happening. Then 168,000 ballots were found to be printed on unofficial, very thin flimsy paper, in other words it sounds like they were short of ballots and they made them up.”