Joe Biden’s disaster in Afghanistan “will go down as one of the great military defeats of all time,” former President Donald Trump said during a Save America rally in Cullman, Alabama on Saturday.

“It did not have to happen that way. This is not a withdrawal. This was a total surrender, a surrender for no reason,” Trump told an audience estimated at 40,000.

Trump said he “dealt” with Abdul Ghani Baradar, the Taliban’s de facto leader, threatening: “Anything happens, we are going to rain terror upon you … Don’t touch our American citizens. Don’t ever come to our country.”

“They understood our power and that I would not hesitate to use it in defense of our citizens and the Taliban understood that, maybe as well as anybody. [The Afghanistan crisis] would have never happened if I was president. Our country was so respected. Everyone respected our country,” Trump said.

Biden is overseeing “the greatest foreign policy humiliation in the history of the United States of America,” Trump said, calling it “the most astonishing display of gross incompetence by a nation’s leader, perhaps at any time that anybody has ever seen … Vietnam looks like a masterclass in strategy compared to Joe Biden’s strategy.”

“All he had to do is leave the soldiers there until everything’s out: our citizens, our weapons. Then you bomb the hell out of the [five] bases … And you say, ‘Bye bye.’ The scene of those big giant planes taking off with people hanging on the sides and falling off — there’ll never be anything like that,” Trump stated.

[The photo below captures part of the massive crowd which turned out for Saturday’s Save America rally. Also below, see the full Trump rally.] 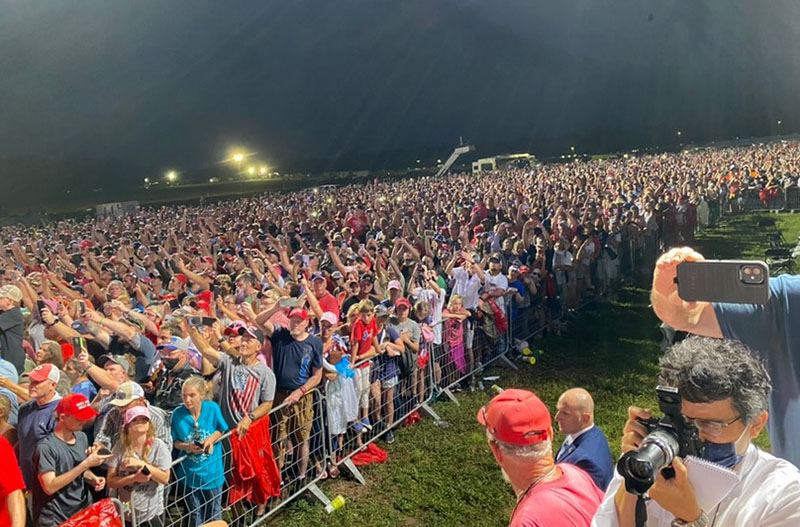