Without diesel fuel, trucking and non-electric powered railroad lines would come to a halt. And so would the American economy.

Almost all consumer items are transported across the United States via truck or by train. 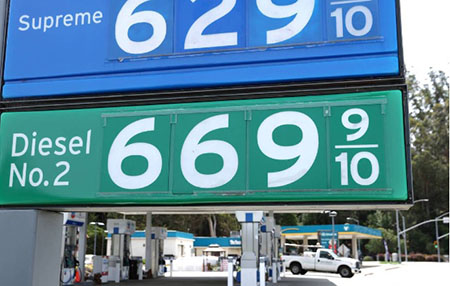 Supplies of diesel distillates, such as heating oil and jet fuel, have fallen to their lowest levels in more than 10 years, Mike Taylor of Combined Energy Services told Fox News host Tucker Carlson.

Taylor said that New England will likely freeze this winter because of Democrat-led policies.

“The climate change agenda in the Northeast, Tucker, is really what’s causing this,” he said, citing the “demonization of fossil fuels” by Team Biden.

Taylor, the top executive for Combined Energy Services, which is a leading U.S. energy supplier in the northeast, said that Team Biden’s policies are restricting energy production and preventing his firm from keeping up with critical consumer needs in the region.

Taylor said most of the northeast’s supplies of diesel, kerosene, home heating oil, and other fuels, comes from refineries in the Philadelphia and New York metro areas.

Meanwhile, U.S. diesel reserves are at their lowest levels since 1951.

Over the span of the last two weeks, the nation’s diesel supply has fallen to 25 days, well below the 35-40 days that offers a comfortable buffer for the fuel markets, according to the Energy Information Administration (EIA).

Diesel inventories in New England and New York are down over 50 percent since last year and at their lowest levels since 1990, Andy Lipow, president of Lipow Oil Associates, told CNBC.

Lipow said East Coast refineries are trying to produce as much diesel as possible, but they are dependent on seaborne shipments of crude.

Any serious delay in the weather can cause a terminal to run out of supplies.

East Coast refineries operated at 100 percent capacity in June and July, but now they are running at 102 percent, according to the EIA,

“No more supply is forthcoming from the four East Coast refineries,” Lipow said.