Americans may never get the full story of what transpired at the U.S. Capitol on Jan. 6.

Many leading Democrats and Republicans in the Big Tech and legacy media bubble are sticking to a condemnation narrative targeting President Donald Trump and his supporters. Their self-serving tweets and sound bites are doing nothing to unmuddy the waters. 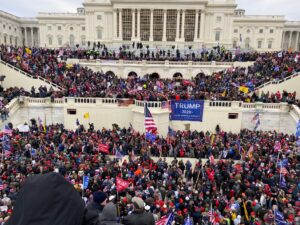 On the other hand, multiple videos online contradict that narrative of pro-Trump demonstrators as ‘domestic terrorists’.

Many questions are not being asked or answered by corporate media and U.S. officials about precisely who was responsible for a dramatic series of disturbing and violent events inside the Capitol. Worse, those actions have yet to be even accurately chronicled in the rush to condemn all Trump supporters including the truly peaceful protesters that day outside the Capitol.

As a result, literally tens of millions Americans are tuning out the legacy media’s talking heads and heeding online  and alternative media accounts about what “really happened” which has given rise to multiple conspiracy theories.

For example, OAN’s Christina Bobb noted that Capitol Police had stood aside to allow protesters into the Capitol.

Capitol police open doors for the protestors. They stand aside and invite them inside. pic.twitter.com/OnSd3KGzz5

As for those who forcefully entered the Capitol building on Jan. 6, Democrats and the corporate media have labeled them Trump supporters. Video footage appears to show a much different picture.

So was this a simple pro-Trump protest that got out of hand or is there much more going on under the surface?

Dan Bongino tweeted: “The Hunter Biden stuff about to come out is going to deeply disturb and shake you. Even more so than the troubling information which emerged a few months ago. Get ready, it’s ugly.” @Dbongino

Retired Lt. Gen. Thomas McInerney noted in a video: “The president has all this data. … Wednesday they took Pelosi’s laptop. She’s frantic. … They are terrified because they have that data. This is treason, high treason. You see the media and all they are talking about is Wednesday. So something is going on. We must stand up. You are like a young soldier at Normandy or the Battle of the Bulge. This is a critical time for the world if America goes down. … Wake up America. This is serious stuff.”

McInerney was a respected commentator for Fox News but fell out of favor when he criticized Arizona’s late Sen. John McCain in 2018 and called for an investigation of the Nov. 3, 2020 presidential election based on charges about the role played by Dominion Voting Systems.

“Freedom never kneels except for God,” Lt. Gen. Michael Flynn tweeted before being banned from the platform.

In that tweet, Flynn linked to a petition from a Tea Party affiliate which called on President Donald Trump to proclaim “limited martial law.”

Attorney and Trump supporter Lin Wood, who was also purged from Twitter, shared the same petition. “Our country is headed to civil war,” Wood wrote. “@realDonaldTrump should declare martial law.”

Attorney Sidney Powell was another target of the purge. Powell had retweeted calls for Trump to invoke the Insurrection Act and to suspend the election and establish “military tribunals.”

The Gateway Pundit reported on a video that was posted to Parler, before Big Tech moved to shut down that platform, which is said to show Antifa members handing out weapons before storming the Capitol building.

Meanwhile, House Speaker Nancy Pelosi during a online meeting with constituents in San Francisco on Saturday once again played the tired race card, claiming the Trump supporters at the Capitol on Wednesday chose their “whiteness over democracy.”

“When that assault was taking place on the Capitol, 3,865 people in our country died of the coronavirus, many of them people of color because of the injustice of it all,” the California Democrat said, adding, “The next day, on Thursday, 4,000 people died of the coronavirus. Why? Because decisions were made at the highest level, months before in the Oval Office, of denial, distortion, delay, calling it a ‘hoax.’ ”

Notably, Pelosi slammed Trump on Jan. 31 of last year for his “un-American” action, closing off travel from China in an effort to halt the spread of the virus.

Joe Biden’s handlers on Thursday sent him out to deliver a similar message to Pelosi’s: ““You can’t tell me that if it had been a group of Black Lives Matter protesters yesterday they wouldn’t have been treated very differently than the mob of thugs that stormed the Capitol. We all know that is true. And it is totally unacceptable. Totally unacceptable. The American people saw it in plain view.”

2021, Things that don’t add up: What really happened on Jan. 6, WorldTribune.com