PBS affiliates which receive millions of dollars in funding from U.S. taxpayers have aired a pro-communist China documentary produced in conjunction with a Chinese propaganda outlet, a report said.

The documentary, titled, “Voices from the Frontline: China’s War on Poverty,” was produced in conjunction with CGTN, a Chinese-government controlled media outlet that is registered as a foreign agent with the U.S. Department of Justice, The Daily Caller News Foundation reported on May 14. 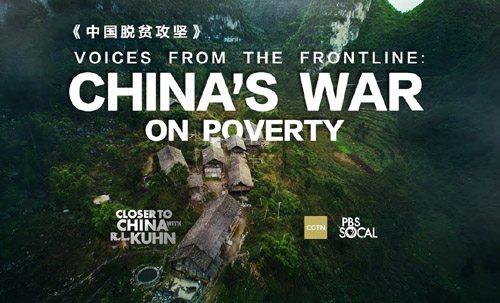 PBS affiliate KOCE, known as PBS SoCal, helped produce the film and premiered it on May 11. KCET, which merged with KOCE in 2018, also aired the Chinese propaganda film. Other PBS affiliates, including in Idaho and Las Vegas, have either already aired the film or plan to do so.

“In the last forty years, China’s economic development has lifted more than 700 million people out of poverty,” reads the introductory script in the propaganda film.

“To President Xi Jinping, ending poverty is his most important task,” the script states.

The closing credits of the documentary show that it was produced by “The Kuhn Foundation and PBS SoCal in association with CGTN.”

The propaganda film did not disclose CGTN’s links to the Chinese government. It also did not detail the ties that the film’s producer, Robert Lawrence Kuhn, has to Chinese officials and the government’s State Council Information Office, which specializes in foreign propaganda, the Daily Caller report said.

The difference between propaganda and reality, however, is stark, analysts say. This is evidenced by the more than 1 million ethnic Muslims being held in the Chinese Communist Party’s concentration camps and the brutalization of pro-democracy activists in Hong Kong.

The consequence under President Xi Jinping is China’s most pervasive and brutal oppression in decades. What modest opening had existed briefly in recent years for people to express themselves on matters of public concern has been decisively closed. Civic groups have been shut down. Independent journalism is no more. Online conversation has been curtailed and replaced with orchestrated sycophancy. Ethnic and religious minorities face severe persecution. Small steps toward the rule of law have been replaced by the Communist Party’s traditional rule by law. Hong Kong’s limited freedoms, under “one country, two systems,” are being severely challenged.

PBS and other publicly-funded news outlets like NPR “have come under fire in recent years, with conservatives pushing to de-fund the organizations over a perceived liberal bias. Other news outlets have come under scrutiny for publishing propaganda promoted by the Chinese government,” Daily Caller investigative reporter Chuck Ross wrote in the May 14 report.

U.S. President Donald Trump has proposed de-funding the Corporation for Public Broadcasting (CPB), which provides the taxpayer dollars that go to PBS affiliates and NPR.

Kuhn, a former investment banker, appears to be highly regarded in China, though he is not as well known in the U.S. He has made appearances on channels like CNN and Bloomberg over the years to discuss issues in China, but appears frequently on Beijing-controlled news outlets like CGTN, CCTV, and China Daily.

In December 2018, Kuhn was awarded the China Reform Friendship Medal at an event held in Beijing and attended by Chairman Xi. Kuhn’s personal website shows a photo of him shaking hands with Xi at the event, and refers to the medal as “China’s highest award.”

Kuhn hosted a delegation that same year to Beijing to meet with Jiang Jianguo, who served as minister of the State Council Information Office, the office reported.

The State Council is also the Chinese Communist Party’s Central Office of Foreign Propaganda, according to the Wilson Center.

Kuhn’s name previously surfaced in connection to Jeffrey Epstein, the financier who is said to have committed suicide while in jail on charges that he molested underage girls. Epstein through his nonprofit contributed $150,000 to the Kuhn Foundation in 2017, The Daily Beast has reported. Epstein’s nonprofit also bankrolled a PBS series that Kuhn produced on spirituality called “Closer to Truth.” CNBC reported that Epstein contributed $500,000 to Kuhn’s project in 2018.

Kuhn offers his views on the Chinese government on a weekly segment hosted by CGTN and through documentaries he has produced in coordination with Chinese propaganda outlets.

In a recent episode of “The Watcher,” a segment that airs on CGTN, Kuhn praised the Chinese Communist Party’s handling of the coronavirus outbreak.

“China’s mobilization is unprecedented in global health history. Nowhere could it work like it works in China. The reason it works is because the party works, the Communist Party of China,” Kuhn said.

“President Xi Jinping calls for fighting the outbreak in an open and transparent manner. That’s the key: transparency, complete transparency. As China has done and is doing updating all confirmed patients and updating all the data everyday,” he added.

That narrative falls flat outside of Chinese propaganda circles and some major media in the U.S. which will prop up anything that they believe will damage Trump, analysts say.

An analysis in the hardly-Trump-friendly USA Today said: the “coronavirus crisis proves communism is still a grave threat to the entire world. If Beijing had just been honest, the pandemic could be preventable.”

An op-ed in leftist Politico said: “China committed unforgivable sins of commission, affirmatively lying about the outbreak and punishing doctors and disappearing journalists who told the truth, whereas the WHO committed sins of omission—it lacked independence and courage at a moment of great consequence. … In effect, China and the WHO worked together to expose the rest of the world to the virus, at the same time they downplayed its dangers.”