Islamic State (ISIS) asked and was allowed to withdraw from the Syrian-Lebanon border area in the Qalamoun region, an official in Syrian President Bashar Assad’s military alliance said.

“Islamic State asked for negotiations and a withdrawal, and the Syrian side and Hizbullah agreed,” the official said. 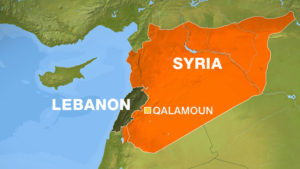 ISIS was permitted to withdraw to Deir al-Zor province, which borders Iraq to the east and is almost entirely under Islamic State control. The Syrian government has held on to a pocket of territory in the provincial capital of Deir al-Zor city, and at a nearby air base.

Syrian government forces and their Lebanese ally, Iranian-backed Hizbullah, had launched an offensive to drive ISIS jihadists from the western Qalamoun region of Syria on Lebanon’s border, the Jerusalem Post reported.

The offensive coincided with a Lebanese army campaign on Lebanon’s side of the border to drive ISIS from the Ras Baalbek area in the country’s northeast.

Earlier this month, dozens of Nusra Front militants and thousands of Syrian refugees were transferred from Lebanon into rebel-held Syria in a deal negotiated between Hizbullah, the Syrian government and Nusra Front, the Jerusalem Post report said.